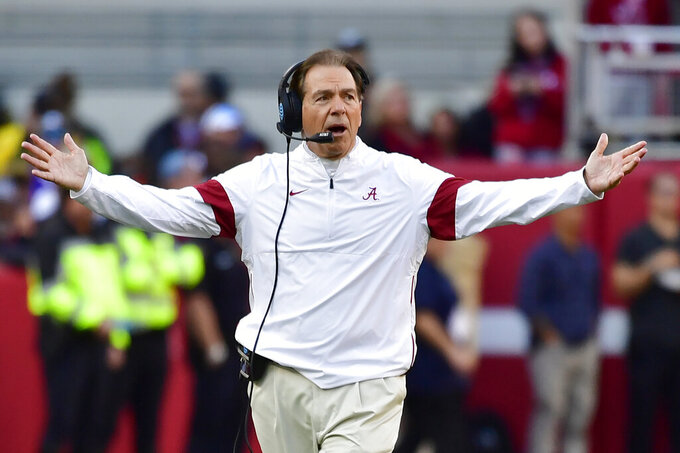 FILE - In this Nov. 9, 2019, file photo, Alabama coach Nick Saban reacts during the first half of the team's NCAA college football game against LSU in Tuscaloosa, Ala. As Alabama, Ohio State, Clemson, Oregon, Notre Dame, Oklahoma and Florida prepared to play for conference championships, they signed top-10 recruiting classes for 2021 they hope to fuel their next title contenders.. (AP Photo/Vasha Hunt, File)

As Alabama, Ohio State, Clemson, Oregon, Notre Dame, Oklahoma and Florida prepared to play for conference championships, they signed top-10 recruiting classes for 2021 they hope to fuel their next title contenders.

The most unusual college football season in memory brought the convergence Wednesday of the start of the early signing period with the end of the regular season, which includes 10 conference championship games this weekend.

“I could be here all day talking about how different this is,” Ohio State coach Ryan Day said on the Big Ten Network.

The pandemic has altered much about the college football season and recruiting this year, but somethings never change. Alabama is on the way to having the highest-rated class in the country. The Buckeyes are not far behind. And it starts at the top.

According to 247 Sports' composite player rankings, there are 34 five-stars recruits in the class of 2021.

As of late Wednesday afternoon, Alabama had signed five of them and was expected to land at least one more. Ohio State landed five five-stars, including defensive end Jack Sawyer from nearby Pickerington North High School.

Georgia, which has been pushing Alabama in the Southeastern Conference but not yet been able to get over the hump, has four five-stars in the fold.

“It’s a closer-to-home class which probably was directed by COVID with kids wanting to stay closer to home,” Georgia coach Kirby Smart said.

That’s a little less than half the five-stars in the country going to three schools.

Only Clemson, Miami and LSU also signed multiple five-stars. Oklahoma has a chance to make that very short list by the time all the national letters of intent have been submitted in February, when the traditional signing period opens.

Day said he doesn't care about winning the mythical recruiting national title, something Alabama has done eight times under coach Nick Saban since 2010.

“In the end, I just want to find the right guys for us,” Day told reporters during zoom news conference intended to address both signing day and the third-ranked Buckeyes' Big Ten title game against No. 15 Northwestern, but never moved off recruiting.

As much as it seems like signing day during a game week could be overwhelming for a program trying to earn a conference title and spot in the college football playoff, in reality the hardest work of recruiting for the top schools has been done for a while.

Wednesday was mostly a formality.

Michigan slogged to a 2-4 record and has dragged around speculation about coach Jim Harbaugh's future this season.

Even with the coach's future still to be determined, day signing was OK for the Wolverines.

On the positive side for the Wolverines on signing day: In-state running back Donovan Edwards, a four-star, signed with Michigan. The Wolverines also held on to four-star receiver Xavier Worthy from Fresno, California, who had taken a late trip to Alabama.

This class also features the highest-rated quarterback Michigan has signed under Harbaugh in J.J, McCarthy, an Illinois native from IMG Academy in Florida.

It all added up to class rated 10th by 247 Sports. Now, the question is will Harbaugh, who has only one year left on his contract, be around to coach it?

— LSU slumped to 4-5 after winning the national title in 2020, but the Tigers locked up another top-10 class, including the highest rated player in Louisiana.

Defensive tackle Maason Smith of Terrebonne High School in Houma and was rated the No. 1 overall prospect in the nation by Rivals. Smith had indicated his final decision would come down to a choice between LSU, Alabama, Georgia and Miami. LSU coach Ed Orgeron held that Tiger.

Korey Foreman, a defensive end from Corona, California, and 247's top prospect in the country, might be signing during the early period.

But the plan apparently is to keep it a secret.

It is an increasingly popular trend among blue chips. Sign in December, but have the school agree to withhold an announcement. Then the prospect can do so himself at one of the nationally televised high school all-star games in January.

Even though the games won't be played this year, the All-American Bowl is having a declaration special on Jan. 2. Foreman, a one-time Clemson commit, is expected to announce where he is going then.

USC seems to be the favorite. Even without Foreman it has been a good bounce-back class and season for the Trojans and coach Clay Helton, whose uncertain status at the end of 2019 contributed to 2020 recruiting class that landed outside the top-50.

No. 13 USC plays Oregon for the Pac-12 championship Friday and currently has a top-15 class — highlighted by landing four-star quarterback Jaxson Dart from Utah on Wednesday. If the Trojans can keep Foreman away from LSU, Clemson and Arizona State, they could vault into the top 10.