Buchner leads way in Freeman's first season with No. 5 Irish 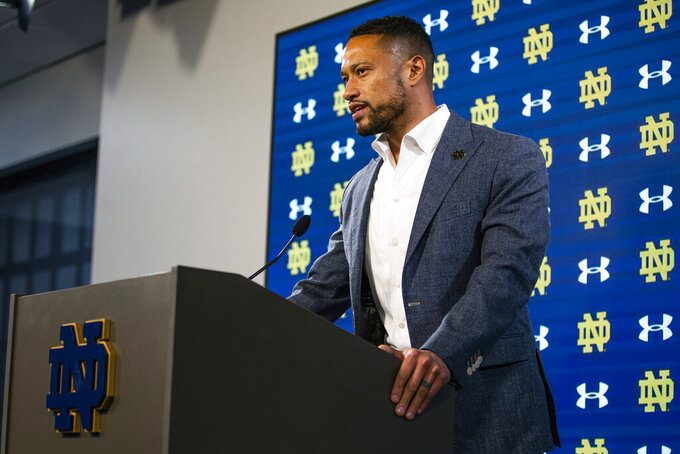 Back then, in 1964, 41-year-old Ara Parseghian and eventual Heisman Trophy winner John Huarte teamed up to nearly lead Notre Dame to a national championship. Today, it's 36-year-old Marcus Freeman and Tyler Buchner leading No. 5 Notre Dame into its blockbuster Sept. 3 season opener at Freeman's alma mater, No. 2 Ohio State.

Freeman and offensive coordinator Tommy Rees are convinced Buchner is the right guy for the job.

“We just think that Tyler brings an element with his feet, the ability to extend plays and have a quarterback running game,” Freeman said.

Buchner provided a glimpse of what he could do when he appeared in 10 games last season as a true freshman. He shared time with departed starter Jack Coan, working in special packages that took advantage of his dual skills.

Buchner rushed for 358 yards and three scores, completed 21 of 35 passes for 298 yards and three more touchdowns, and collected one honor Huarte didn't have at the start of his final college season — a letter. But he never started for the Irish, who went 11-2 and finished No. 8, and had to beat out his best friend, Drew Pyne, for the No. 1 job.

“The word we’ve preached all camp is confidence,” said Rees, a former Notre Dame quarterback who started as a freshman. “I think Tyler’s finding his stride right now, so we’re going to continue to have an extremely confident and calm quarterback.”

For Freeman, the spotlight will shine even brighter.

The former Buckeyes linebacker was promoted from defensive coordinator following Brian Kelly’s surprise December departure for LSU. Freeman has never been a head coach at any level.

And in an environment where one loss can ruin title dreams, Freeman knows Notre Dame can't avoid an early stumble — even against the highly-touted Buckeyes and their hostile home crowd.

“I’m sure it will be extremely loud,” Buchner said. “I did play three quarters at Virginia Tech and have been in games in some really big spots. I feel confident in myself in those situations.”

Parseghian and Huarte faced a similar scenario at Wisconsin all those years ago before a loss at Southern California ended their perfect season and their championship aspirations.

Now it's up to Freeman and Buchner to recreate the memories of that magical start with a slightly edited final chapter.

So far, he likes what he sees. Center Zeke Correll replaces Jarrett Patterson, who is moving to guard and will play opposite Josh Lugg. Joe Alt and Blake Fisher will man the tackle spots.

Buchner will be without one of his most experienced targets after sixth-year receiver Avery Davis tore a knee ligament. He missed the end of last season after injuring his other knee.

“You want to talk about heartbreak for a program — everybody has felt that for Avery,” Rees said. “Offensively, we've got enough talent and it’s my job to put our guys in the right spots.”

All-American tight end Michael Mayer does return after catching 71 passes for 840 yards and seven TDs in 2021. Speedster Braden Lenzy is the top returning receiver. He had 32 receptions for 350 yards and three scores. Freshman Tobias Merriweather has been a pleasant surprise.

Tyree also could be the kick returner after returning one for a score last season. He also rushed 56 times for 232 yards and caught 24 passes for 258 yards with four touchdowns. Diggs is returning from shoulder surgery after produced 256 total yards in 2021.