Catching on: Big Ten receivers putting up some big numbers 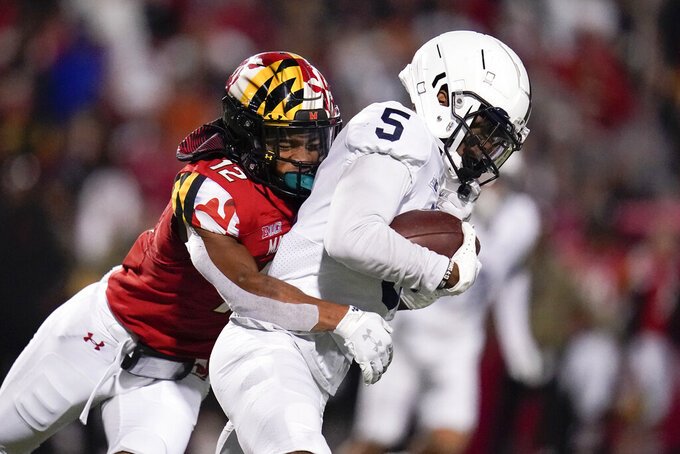 Ohio State's Jaxon Smith-Njigba cut toward the middle, turned and caught a short pass from C.J. Stroud and turned the short route into a highlight-reel play. Smith-Njigba juked past a Nebraska cornerback, burst up the left side and sped to the end zone for a 75-yard touchdown.

The longest play of the sophomore's career highlighted a record performance that helped No. 6 Ohio State escape Nebraska with a 26-17 victory. Smith-Njigba came up huge with top receiver Garrett Wilson out, setting one school mark with 15 catches and finishing just shy of another with a personal-best 240 yards receiving.

He wasn't the only Big Ten receiver with more than 200 yards. For a conference known for stodgy offenses and hard-hitting defenses, some pretty gaudy numbers are cropping up.

Jahan Dotson set a Penn State record with 242 yards in a win over Maryland. Purdue's David Bell went off for 217 yard while setting a school record with 15 games of triple digit receiving yardage as the Boilermakers knocked off Michigan State.

“There's explosive athletes across this league and at wide receiver, there's some — I think — first-round (NFL) talent that's really showcasing their skills,” Northwestern coach Pat Fitzgerald said. “Just watching crossover tape in my preparation, a lot of those plays are being contested by really good DB play. The receivers are just going up and making big-time plays. That makes it really challenging defensively, there's no doubt, when you've got that explosiveness.”

Not since at least 2000 did the Big Ten have three players with 200 or more yards receiving on the same day, according to sports-reference.com. Among Power Five conferences, that hadn't happened since the SEC had three in 2012.

Of the 18 200-yard games this season, the Big Ten has five. That includes two by Bell and one for Michigan State's Jalen Nailor.

Not on that list are arguably the conference's two best receivers — Ohio State's Chris Olave and Wilson. Both are likely to drafted in the top 20. Bell, sixth in the nation with 1,003 yards, could go in the first round as well.

By comparison, the only Big Ten receivers chosen in Rounds 1 and 2 earlier this year were Minnesota’s Rashod Bateman at No. 27 and Purdue’s Rondale Moore at 49. That bumped the total to six from the conference picked in the first two rounds since 2017.

“I think it’s reaching to the point where it’s like, OK, this league does have some really good receivers,” said Wisconsin cornerback Faion Hicks, a fifth-year senior who said Bell in particular deserves more attention. ”A lot of other people say the Big Ten is slow or whatever the case may be, but trust me, it’s not. Penn State’s Jahan Dotson, a great receiver and people know that, but still, I think those guys are up there with anybody in the country.”

Hicks got an up-close look at Dotson when he went for 102 yards and a touchdown to lead Penn State to a 16-10, season-opening win Camp Randall Stadium. The Badgers had better luck against Bell, holding him to 33 yards in a win over the Purdue last month after he rang up a career-high 240 and a touchdown the previous week in the Boilermakers' stunner at then-No. 2 Iowa.

As for Smith-Njigba, his 15 catches surpassed David Boston's school record of 14 at Penn State in 1997. Another 13 yards and he would have matched Terry Glenn's Buckeyes mark set in 1995 at Pittsburgh.