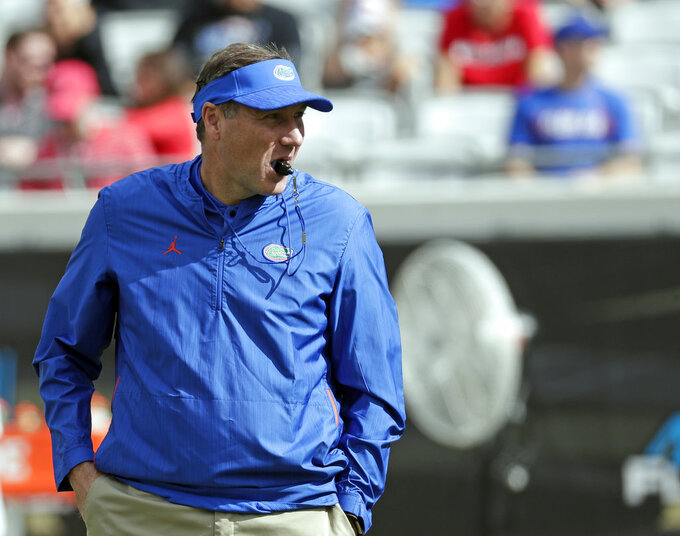 Mullen and the 19th-ranked Gators have a two-game losing streak in which nobody played well, chaos at quarterback , rumors of a locker room scuffle and speculation that a few upperclassmen are considering shutting it down in preparation for the NFL draft.

As for Muschamp's return to Gainesville?

Not really for Florida anymore. Muschamp and his Gamecocks (5-3, 4-3 Southeastern Conference) can only pile on Saturday after all that's happened to the Gators (6-3, 4-3, No. 15 CFP) lately.

Florida has dropped two straight by a combined 40 points, including a 38-17 homecoming debacle against Missouri last week. Feleipe Franks was booed and benched in the Swamp, prompting Mullen to open up the quarterback job.

But backup Kyle Trask broke a foot practicing a trick play Wednesday and is out for the season, leaving Franks to reclaim the starting job against South Carolina.

If that wasn't enough to deal with, there were reports that Franks got into an altercation with teammates in the locker room after the loss to the Tigers and then whispers that some players, including highly touted junior defensive end Jachai Polite, is considering turning his attention toward getting ready for the draft.

"If you don't want to go out there and win the game, I don't really know what is wrong with you."

South Carolina has won three of its last four games , all of them decided by four points or less.

The Gamecocks erased a 10-point deficit in the fourth quarter at Mississippi to win consecutive games for the first time in 2018. If they make it three in a row Saturday, it would give Muschamp a second straight victory against his former team.

"I've got nothing but great memories of Florida," said Muschamp, who grew up in Gainesville and coached Florida for four seasons (2011-14). "Obviously, you don't win enough games, they fire you. That's part of our profession. There are no hard feelings. That's just the way things go in that situation. I've got a great opportunity at South Carolina. I'm glad I'm a Gamecock."

Here are some other things to know about South Carolina and Florida:

"It's going to be fun seeing all those guys (and) for the last time playing against them," Raymond said.

Muschamp went 18-8 at Florida Field during his tenure, including losing six of his final eight. Throw in a 20-7 loss to the Gators in 2016, and Muschamp has dropped seven of his last nine in the Swamp.

Florida coach Dan Mullen has as many losses at the Swamp this season as he did during his first stint in Gainesville. The Gators are 3-2 at home. Mullen went 25-2 at Florida Field as the team's offensive coordinator (2005-09).

Florida played in front of its smallest announced home crowd (80,017) since 1990 last week against Missouri, eliciting this message from Mullen:

"When we sell out the stadium, we win a championship," Mullen said. "It doesn't go the other way. It's not we win, you sell out. You sell out, you win. Go watch teams that have built programs. That's how it works."

South Carolina has won five of the last eight in the series — all with former Florida coaches at the helm — after losing 18 of the previous 19 meetings.