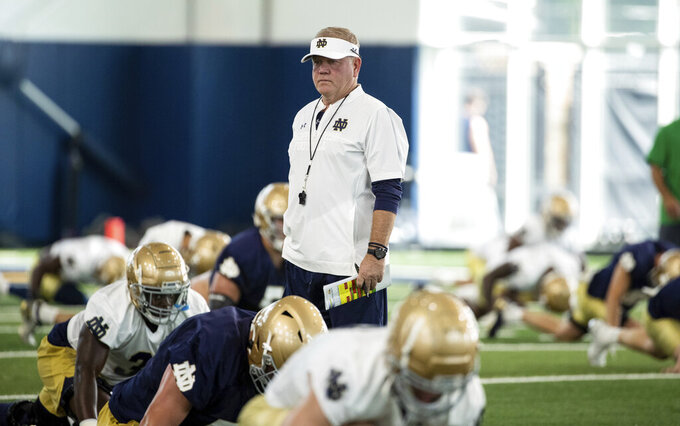 SOUTH BEND, Ind. (AP) — Marcus Freeman believes the best thing he can do as Notre Dame’s new defensive coordinator is to get out of the way of his players.

“This is theirs. They built this. I’m the new guy,” said the 35-year-old Freeman, who seven months ago was picked by coach Brian Kelly to replace Clark Lea after Notre Dame finished 10-2 and ranked No. 5. Lea is now the coach at Vanderbilt.

With Lea in charge of the Irish defense for three seasons, Notre Dame twice made semifinal appearances in the College Football Playoff before losing to eventual national champions Clemson in 2018 and Alabama in 2020.

“Those guys before me, these players have built this place to the giant it is now,” said Freeman, who last season helped Cincinnati to a 9-1 finish following a 24-21 loss to Georgia in a bowl game. “I’m here to help uphold that and hope to exceed those expectations.”

That sounds good, but Freeman has some holes to fill. All-America linebacker Jeremiah Owusu-Koramoah (62 tackles, three turnovers) is in the NFL and so are defensive ends Daelin Hayes and Adetokunbo Ogundeji (13 sacks between them). Cornerback Nick McCloud and safety Shaun Crawford are gone, too.

All those players helped Notre Dame go 10-0 on its way to the Atlantic Coast Conference regular-season title last season. The final two games of the season were losses — a 34-10 blowout by Clemson and a 31-14 semifinal loss to the Crimson Tide.

“Look, we’ve done so many great things these last couple of years and gotten to the playoffs,” linebacker Drew White said. “But what we did wasn’t enough. It’s extra motivation.”

“Coach Lea had a really structured defense, and we all knew it really well, like the back of our hands,” Hamilton said. “Coach Freeman’s defense has structure to it, too, but there’s a lot more variety within it.”

Freeman’s style at Cincinnati was to be relentless on the attack and to confuse the opposition with different looks and coverages. Last season, the Bearcats finished third nationally in interceptions with 16, 10th in total takeaways with 21, eighth in scoring defense (16.8 points per game) and 13th in total defense (324.6 yards allowed per game).

“We have our standard of defense,” Freeman said. “No. 1 is challenging everything. We’re going to be an aggressive group. We play man coverage. We have some zone change-ups, we’re going to pressure and we’re going to try to be multiple upfront and do some different things.”

Joining Hamilton at the back end of the defense is senior strong safety Houston Griffith, who had entered the transfer portal following 2020 but was talked out of it by Freeman. Cam Hart, TaRiq Bracy, Clarence Lewis and Ramon Henderson return for cornerbacks coach Mike Mickens, who played under Kelly at Cincinnati and coached there under Freeman.

The Irish will utilize both three- and four-man looks upfront.

“That’s kind of the biggest differences – having the freedom to bluff and change the fronts,” White said. “We didn’t do a lot of that last year.”