Georgia's search for new QB on hold with no spring practice 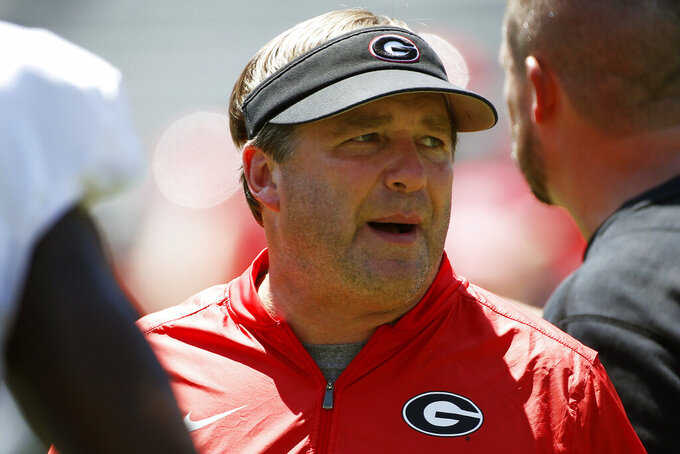 FILE - In this Aug. 17, 2019, file photo, Georgia coach Kirby Smart looks on during warm ups for an NCAA football preseason scrimmage in Athens, Ga. Georgia coach Kirby Smart says quarterback is the position most affected by spring practice being canceled by the coronavirus pandemic. It's bad timing for the Bulldogs, who would have used the spring as a time to have Wake Forest transfer Jamie Newman and others compete to replace three-year starter Jake Fromm. (Joshua L. Jones/Athens Banner-Herald via AP, File)/Athens Banner-Herald via AP)

Georgia coach Kirby Smart says the cancellation of spring football across the nation due to the coronavirus pandemic hurts quarterbacks more than any position.

For Smart's Bulldogs, the timing is especially bad.

Georgia is looking for a new quarterback while planning to install a new offense led by first-year coordinator and quarterbacks coach Todd Monken.

Spring football was expected to be the time when Wake Forest transfer Jamie Newman would join D'wan Mathis, Stetson Bennett and others in the competition to replace Jake Fromm, who bypassed his senior season to enter the NFL draft.

Instead, that competition is on hold. There is no practice while coaches and players observe social distancing rules.

“It's going to affect the quarterbacks more than any position, in my opinion," Smart said Tuesday. “There's no substitute for reps out in the field. We can't argue that we're not going to lose reps. We're losing reps.”

Smart and some of his staff members have had ample time to practice social distancing. They had to remain at their homes for a two-week, self-quarantine period following a trip to Costa Rica “and multiple places down that way.” Now all Georgians — and people around the country — face stay-at-home orders.

Smart had his staff prepare for weekly two-hour video online coaching sessions with players that began on Monday following the go-ahead from the Southeastern Conference. He said there is no way to make up for the on-field sessions normally held each spring.

The good news for the quarterbacks is informal practices were held in preparation of spring practice before classrooms at the University of Georgia were closed. As is normally the case each year, the quarterbacks spent time on their own throwing to receivers.

“We were able to have walk-throughs leading up to spring practice,” Smart said. “We maximized that time and knew that we needed that time, not knowing that we wouldn't have spring, just knowing we had new quarterbacks and really a new offensive system. We had to make sure we spent time with that. So we spent a lot of time on that.”

Since there is no formal spring practice, those informal sessions become more important.

“I feel like he was starting to get some rhythm,” said Smart of Newman. “He got to throw a lot with those guys in their own time that they elected and did a good job, he and Stetson and Carson (Beck) and D'wan. ... That's no substitute for what they would have gotten in spring ball.”

Newman was viewed as one of the nation's top quarterback transfers. He announced his decision to play his final season at Georgia only three days after Fromm entered the NFL draft.

Newman is viewed by many as the favorite to win the starting job. With no spring practice, however, his experience advantage as the 2019 starter for Wake Forest could be neutralized by his rivals having more time at Georgia.

Newman completed 60.9% of his passes for 2,868 yards, with 26 touchdowns and 11 interceptions for Wake Forest last season. He also rushed for 574 yards and six TDs for a Wake Forest team that finished 8-5.

Mathis enrolled at Georgia last year before severe headaches and sinus pressure led to him undergoing surgery in May to remove a cyst from his brain. Bennett is a former walk-on who played behind Fromm.

Monken, who was offensive coordinator for the Cleveland Browns in 2019, faces many challenges when Georgia finally returns to the practice fields. New starters must be found at quarterback, running back and on the line.

“We're going to get all that done when we get the opportunity,” Smart said. “No one knows when that is.”