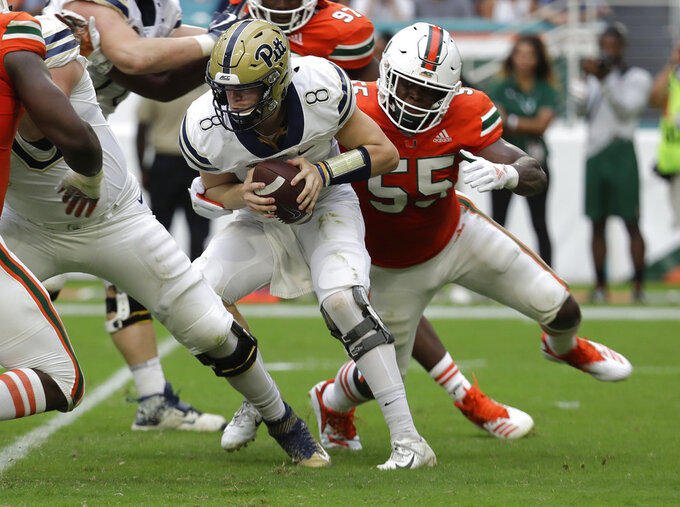 "Every quarterback needs to manage the game first," Pickett said.

Pickett's pre-snap checklist is lengthy. Is the protection right? Does he need to audible? Are the other 10 guys lined up in the right spot? What defense are the opponents in?

"There's a lot that goes on," Pickett said.

Each decision is vital in determining whether the ensuing play does or doesn't work, one of the reasons why Pickett doesn't get too caught up in what he does — or more specifically, what he doesn't do — once the ball is in his hands. If he needs to throw it, great. If he doesn't, even better. Pickett insists he'll never get caught up in his own numbers.

"My whole mindset is to find a way," he said.

One the 20-year-old has no plans on changing Saturday when he leads the Panthers (7-5) onto the field to face No. 2 Clemson (12-0) in the ACC Championship game in Charlotte, North Carolina.

While Pickett's first full season as a starter largely lacked the dazzle of his spectacular coming-out party — he accounted for all three Pitt touchdowns in an emphatic stunner over then second-ranked Miami in the 2017 finale — he hardly cares. He passed for just 1,825 yards, the fewest since 1996 by a Pitt quarterback who played in at least 10 games.

Not that it matters to Pickett. He committed to the Panthers because he believed in what coach Pat Narduzzi is building, not to mount a Heisman Trophy campaign. By that metric, this year has been a success.

"I wanted to get back to a championship here," Pickett said. "It's where this university has been and where it needs to be, winning championships."

Pitt won the Coastal Division for the first time thanks in part to Pickett avoiding mistakes — he threw just five interceptions — and the ever-churning legs of running backs Qadree Ollison and Darrin Hall. If Pickett spends most of Saturday turning around and stuffing the ball into the midsection of his backfield mates, he stressed he will do it "with a smile on my face."

A smile Pickett has tried to maintain during a sometimes uneven year. The Panthers played a daunting nonconference schedule that included losses to Penn State, Central Florida and Notre Dame, games in which he was largely a nonfactor. He averaged just 115 yards passing in the setbacks and his regular season ended with him watching from the sideline after Miami sacked him six times in a 24-3 defeat that took some of the momentum out of Pitt's run to a division title.

Call it part of the maturation process, one Pickett understands was unavoidable, pointing out "some things you can't learn until you go through it." He believes the growing pains have helped make him a better player. Asked to describe the difference between where he is now and where he was a year ago, Pickett responded, "I'm a lot more confident in what I'm seeing and slinging it."

Clemson defensive coordinator Brent Venables is wary. The Tigers have one of the most dominant defensive lines in the country but gave up 510 yards passing last week to South Carolina's Jake Bentley and have had issues this season with quarterbacks like Syracuse's Eric Dungey, who are efficient if not dynamic.

"So Pickett, he's a good football player," Venables said. "He's tough, he's instinctive. Throws a good ball. He's a mobile guy. Plays with a good edge to him, very competitive. Don't know him from Adam, but you can tell all those things from tape. Just kind of a baller."

A moniker Pickett has earned nearly from the moment he stepped on campus in January 2017. He spent most of his freshman year as the third option behind Max Brown and Ben DiNucci. Yet his teammates noticed a swagger about Pickett that belied his inexperience.

Defensive back Dennis Briggs caught a firsthand look last fall while Pickett was running the scout team in practice.

Briggs came in on a blitz and figured he had Pickett cold. One problem. When Briggs went to wrap Pickett up, Pickett spun out of the way and vanished.

Briggs laughs at the memory, mostly because he understands he's hardly the only one who's been embarrassed after underestimating Pickett. It happened to Miami last fall. The Tigers understand they can't afford to let it happen to them if they want to reach the College Football Playoff for a fourth straight year.

Pitt is a 25-point underdog. That's fine by Pickett. Defying the odds is kind of his thing. He watched on TV two years ago when the Panthers stunned Clemson in Death Valley. His view will be far different this time around. A win and the Panthers take another step closer to achieving the vision Narduzzi outlined to Pickett on the recruiting trail, a vision set on winning, not mind-boggling stats. Just the way Pickett likes it.

"We're finding who we are, finding our identity as a program," Pickett said. "I'm just doing my part to step up as a leader of the offense."