Injuries force Vanderbilt to start 3rd QB vs No. 10 Florida 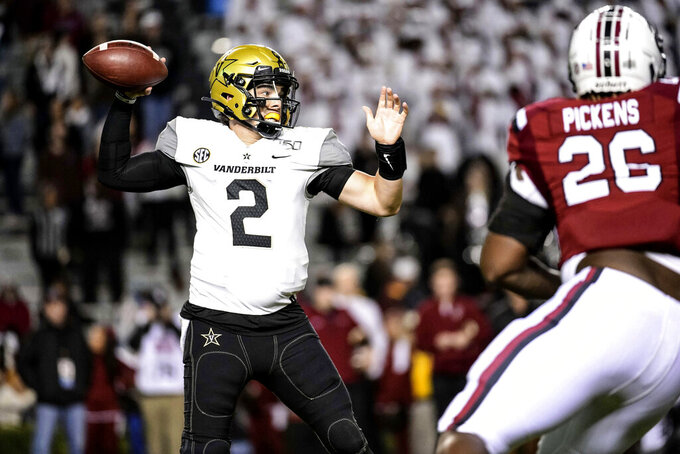 NASHVILLE, Tenn. (AP) — The Vanderbilt Commodores will be starting a third different quarterback when they visit No. 10 Florida this weekend.

Two QBs who have started games this season for Vanderbilt are in concussion protocol.

Coach Derek Mason said Tuesday neither Riley Neal nor Mo Hasan will be available Saturday for the Commodores (2-6, 1-4 Southeastern Conference).

"I'll be playing Deuce Wallace and Allan Walters," Mason said. "Those will be our quarterbacks, and we'll have a third quarterback ready to go."

Neal, a graduate transfer from Ball State, started the first six games before the coach turned to Hasan, a junior college walk-on, against then-No. 22 Missouri. The Commodores upset Missouri, but Hasan got credit for the win despite being knocked out of that game with a hit to the head. He's been in the concussion protocol since Oct. 19.

Vanderbilt went back to Neal last week against South Carolina, and he was 3 of 4 for 46 yards and a touchdown before being knocked out of the game with a concussion. Wallace replaced Neal and was 8 of 17 for 30 yards with two interceptions in a 24-7 loss to the Gamecocks.

Mason said this is similar to his first season at Vanderbilt when he wound up playing four different quarterbacks. Vanderbilt went 3-9 that season. But this is Mason's sixth season when a second straight bowl appearance was expected, and now the Commodores need to win out to become bowl eligible.

"It's not where you want to be," Mason said. "Sometimes it's where you are."

Wallace has never started a game in college, though he has played in six games this season coming off the bench. The 6-foot-2, 212-pound redshirt junior is 33 of 76 for 237 yards and three interceptions. He has yet to throw a touchdown pass.

The 6-2, 210-pound Walters has never taken a snap in a college game. The redshirt freshman from Chatham, New Jersey has worked with the scout team this season.

Mason said they'll split up the reps between the two and figure out who starts.

Vanderbilt's injury issues at quarterback is why Florida defensive coordinator Todd Grantham wishes college had a uniform injury report across the sport to help with preparation. In this case, Grantham says the key is being aware of the running style of the quarterbacks.

"I don't think you really change how you play them," Grantham said. "It's just you have to have awareness of who that guy is to understand his athletic ability."

Notes: Mason said safety Frank Coppet will miss the rest of the season because of an injury. Coppet played in two games.