Kentucky seeks to build on success after a 10-win season 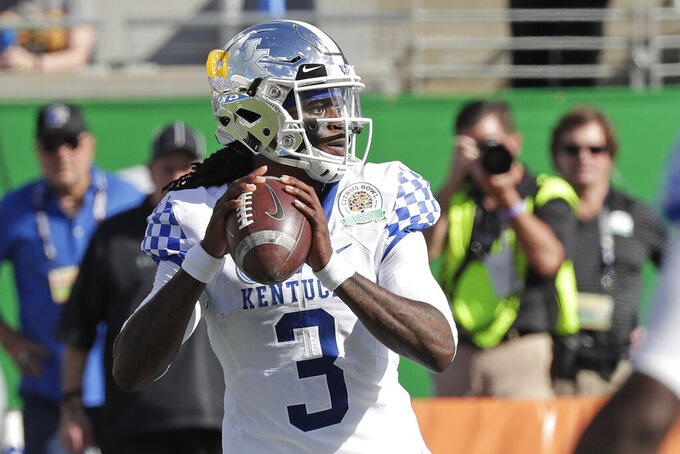 FILE - In this Jan. 1, 2019, file photo, Kentucky quarterback Terry Wilson (3) looks for a receiver against Penn State during the first half of the Citrus Bowl NCAA college football game in Orlando, Fla. (AP Photo/John Raoux, File)

After all, the Wildcats won 10 games for the first time since 1977 — including a victory in the Citrus Bowl , which was their first postseason win since 2008. Career performances from defensive standout Josh Allen and running back Benny Snell helped make it possible, but they've departed along with many significant contributors.

The seventh-year coach is nonetheless confident Kentucky can remain competitive with some returning starters and veteran reserves eager to step up after playing behind some of the program's best players. The Wildcats will be younger in many aspects, but Stoops sees an opportunity for players to blossom.

"That's what's exciting because sometimes we all focus on the things we lose and don't put enough focus on the things we're returning," said Stoops, who was named Southeastern Conference coach of the year. "There are some very mature, good football players on this team. There's a lot to build around, so that excites us."

But with just 10 starters back — including four each on defense and offense — the new regulars must adapt quickly.

The question defensively is how Kentucky (10-3, 5-3 SEC, No. 12 in final AP Top 25) will adjust without career sacks leader Allen (31.5). His school-record 17 sacks last year led one of the nation's stingiest units and helped make him a consensus All-America selection. The Jacksonville Jaguars selected him seventh overall in last spring's NFL Draft.

Kentucky's front seven returns key players such as linebackers Kash Daniel (84 tackles) and nose guard Quinton Bohanna. First-year defensive coordinator Brad White expects that group to shoulder the load initially as the Wildcats break in the newcomers and replenish a secondary that combined for 24 career interceptions.

"We know we've got a good, experienced D-line," White said. "We know we have the inside backers. Those guys have to carry a little bit more during a down and let the younger guys settle in."

Offensively, the exit of career rushing leader Snell (3,873 yards, including 1,449 with 16 touchdowns last fall) has shifted the focus toward the passing game. Quarterback Terry Wilson returns for his second season behind center and has experienced receivers to work with.

Balance is the goal, though the ground game might be a group affair as the running backs begin life after Snell. Wilson is encouraged and anticipates the new look that distinguishes Kentucky in all phases.

"We're loaded," Wilson said. "We have depth that we need and it's going to be fun to show everybody what we can do and how explosive we're going to be."

Kentucky opens on Aug. 31 against Toledo in the first meeting between the schools.

Here are other things to watch as the Wildcats seek their fourth consecutive winning season:

The junior QB threw for 1,889 of his 2,489 yards of total offense, but his first season as the starter included just three more TDs (11) than interceptions. Wilson spent the spring improving his short throws and decision making, which offensive coordinator Eddie Gran believes will make him more effective this fall. "He has worked awfully hard," he said. "What I'm really looking for from him is understanding this offense better to get out of second-and-long, third-and-long situations. We've got to stay out of that."

Though Kentucky lost four of its top seven receivers from last season, Wilson will have plenty of options with nine returnees among a young corps. The most notable veteran is junior Lynn Bowden, a big-play threat who led the Wildcats with 67 receptions for 745 yards. Josh Ali, Isaiah Epps and tight end Justin Rigg are back after combining for 236 yards on 22 catches.

Sophomore linebacker Josh Paschal played the final three games last season after having surgeries and treatments for a malignant melanoma on the bottom of his right foot. The 6-foot-3, 284-pounder recently underwent his final treatment while also preparing for a projected start at outside linebacker. "Of course, there have been trials," Paschal said on media day, "but I had my faith and my faith has grown tremendously during this time. ... All the support I'm getting has really helped me through everything."

The Wildcats have eight home games this season, including a Sept. 14 meeting against Florida in search of consecutive wins against the Gators for the first time since 1976-77. Arkansas (Oct. 12) and Tennessee (Nov. 9) also visit, along with rebuilding rival Louisville on Nov. 30 in the season finale. Kentucky visits defending SEC East champion Georgia on Oct. 19.