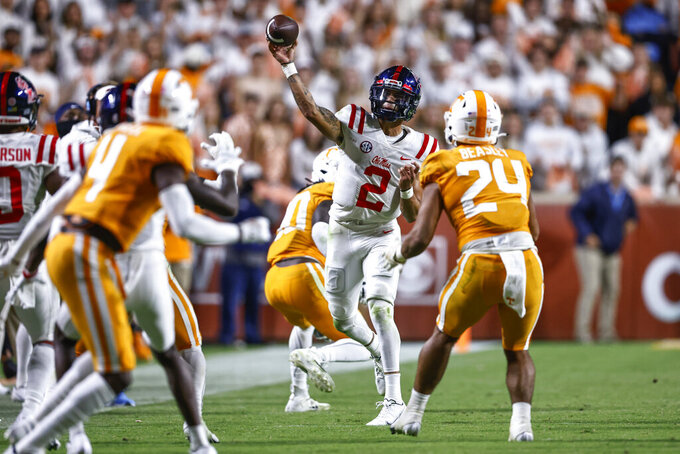 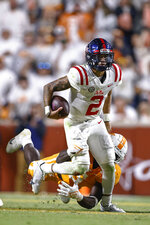 Corral rushed 30 times for 195 yards in the 12th-ranked Rebels' 31-26 win over Tennessee, which Kiffin said took a physical toll on the QB.

“He's not in very good shape," Kiffin said Monday. "Hasn’t been for the last two days. Hopefully he’ll play but I’m not feeling really good about that right now.”

Corral is a leading candidate for the Heisman Trophy. He has passed for 1,728 yards and 14 touchdowns against just one interception. Corral is also the Rebels' leading rusher with 450 yards and eight scores.

Kiffin didn't elaborate on Corral's status or the nature of his injuries. Corral told reporters after the Tennessee game that he rolled his ankle.

“It's all good though. It's a little stinger,” Corral said Saturday night. “It went dead for a second, like a stinger. But I was good after.”

Luke Altmyer replaced Corral briefly in the game, but is 0-for-4 passing this season. Kinkead Dent, who is listed as the second-teamer has completed 2 of 4 passes for 7 yards.

John Rhys Plumlee is a former starting quarterback who was converted to receiver.