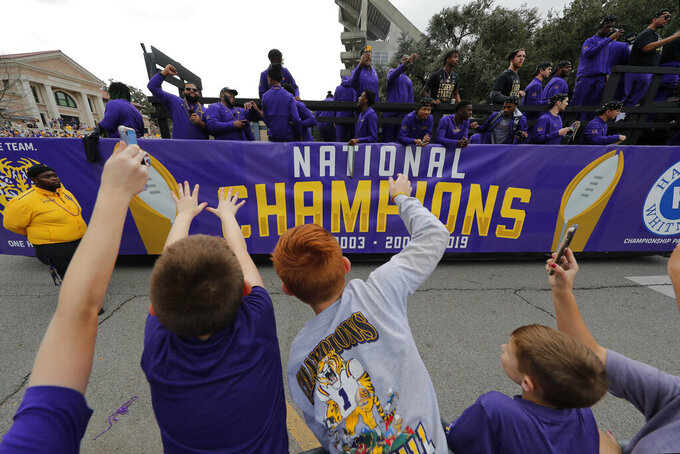 A day after visiting with President Donald Trump at the White House, Tigers players rode on trucks pulled by floats and tossed Mardi Gras beads to fans along the route through the western side of campus to the Pete Maravich Assembly Center.

LSU coach Ed Orgeron led players into the arena, shaking both fists above his head as the team was greeted with a raucous standing ovation. Heisman Trophy-winning quarterback Joe Burrow sauntered in close behind, wearing sunglasses and a backward baseball cap with beads dangling around his neck.

After the team had taken seats on the floor of the arena, Burrow stood, removed his cap and took a bow when he was introduced over the public address system.

“This is a great cap to a great season,” Burrow told the screaming fans.

Burrow also presented a replica Heisman Trophy to the school. Orgeron was presented with college football's coaches' award, a crystal football, and the national championship trophy as the LSU band played “We Are The Champions.”

“I've always dreamed of making plays and bringing a trophy back here,” he said in an interview from the stage. “Walking in here man, I’m like a little kid from Nashville and would dream of stuff like that. I've had to fight back tears seeing all the people celebrating us, and the crazy thing is, we did this for ya'll. We're celebrating ya'll.”

LSU's most recent national championship was its fourth, but this season has been widely viewed as the best in program history. LSU finished 15-0 with seven victories over teams ranked in the top 10 at the time the games were played. The regular season was highlighted by a thrilling 46-41 triumph at Alabama which ended LSU's eight-game losing streak in the series and secured the Tigers' place atop the SEC West.

LSU followed its 12-0 regular season with lopsided victories over Georgia in the Southeastern Conference championship, Oklahoma in the College Football Playoff semifinal and Clemson in the final.

Along the way, Burrow took ownership of every significant LSU passing record while becoming the first quarterback in the program's century-and-a-quarter history to win the Heisman — and only the second Tigers player at any position to take home college football's most prestigious individual award.

Burrow's 5,671 yards passing tied for third most in a single season in NCAA history and his 60 passing touchdowns set an NCAA record.

LSU led the nation in scoring with 48.4 points per game and in total offense with 568.5 yards per game.

Tigers sophomore Ja'Marr Chase, who caught 84 passes for 1,780 yards and 20 touchdowns, received the Biletnikoff Award as the nation's top receiver.

“I didn't expect this from our people at the parade,” Orgeron told WVUE-TV. “It's the first time I've been on a float. ... The celebration here tonight was first-class.”