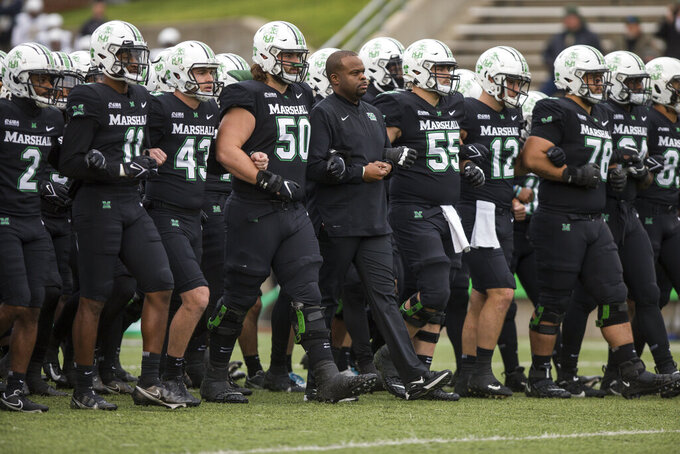 FILE - Marshall players and coaches take the field against UAB in an NCAA college football game on Saturday, Nov. 13, 2021, at Joan C. Edwards Stadium in Huntington W.Va. On Tuesday, March 29, 2022, Conference USA announced in a joint statement with Marshall, Old Dominion and Southern Miss that it has reached a resolution with the three schools to expedite their early move to the Sun Belt. (Sholten Singer/The Herald-Dispatch via AP, File)

CHARLESTON, W.Va. (AP) — Conference USA has agreed to allow Marshall, Old Dominion and Southern Miss to expedite their move to the Sun Belt.

The resolution announced in a brief, joint statement Tuesday allows the three schools to withdraw from Conference USA by the end of the current academic year.

Marshall, Old Dominion and Southern Miss accepted invitations to the Sun Belt during the fall. Each announced last month they planned to terminate memberships in C-USA on June 30 to join their new conference.

C-USA then filed a request for arbitration and said the three schools were contractually obligated to stay put for another year, prompting Marshall, Old Dominion and Southern Miss to file their own court complaints against the league.

The Sun Belt’s expansion from 10 to 14 football schools also includes James Madison, which announced in February it is moving from the second-tier FCS to the FBS level this summer. The Dukes went 12-2 last fall and reached the national semifinals for the fifth time in the last six years.

In early March, the Sun Belt released a composite schedule with the four new additions. The season kicks off Sept. 2 when Old Dominion hosts Virginia Tech of the Atlantic Coast Conference. The next day, Southern Miss will host Liberty, Marshall will host Norfolk State, and James Madison hosts Middle Tennessee.

The Sun Belt did not immediately reply to an emailed request for comment Tuesday night.

Conference USA said Tuesday it will enter the 2022-23 academic year with 11 members. The league last month had released a football schedule for the 2022 season with 14 teams, including Marshall, Southern Miss and Old Dominion. Six other C-USA schools have announced they are leaving for the American Athletic Conference, but not until 2023.

C-USA plans to add Liberty, New Mexico State, Jacksonville State and Sam Houston State to rebuild the conference, but those schools are not scheduled to join until 2023.

Conference USA “is committed to the long-term growth of the league as we usher in new members in the coming years,” the league said in a separate statement. "As we begin this new era of Conference USA, our focus remains on providing the best possible experiences for our student-athletes while engaging in the broader national conversation and process around changing the overall model. The landscape of college athletics has shifted expansively and we will continue to be a substantial part of that evolution.”