Missouri, Florida scuffle on field at halftime in Swamp 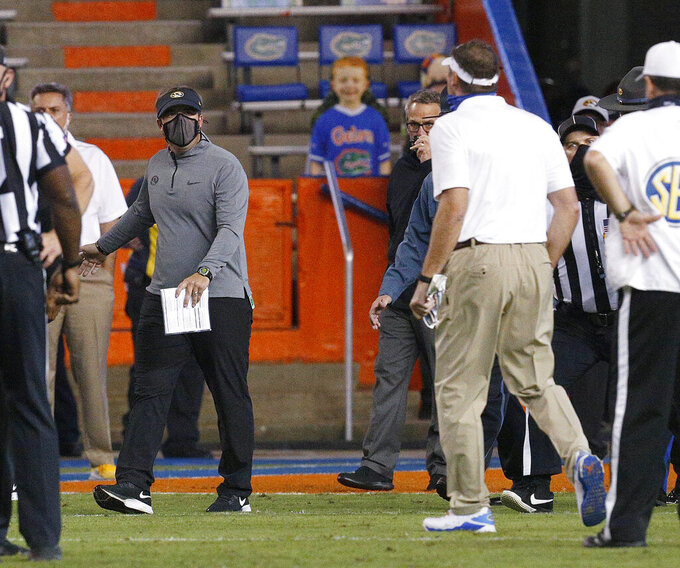 Missouri coach Eliah Drinkwitz, left, and Florida coach Dan Mullen, right, yell at each other after a fight broke out at the end of the first half of an NCAA college football game in Gainesville, Fla., Saturday, Oct. 31, 2020. (Brad McClenny/The Gainesville Sun via AP)

GAINESVILLE, Fla. (AP) — Missouri and Florida got into a benches-clearing scuffle at halftime that included several players throwing punches. Coaches Eli Drinkwitz and Dan Mullen got in the middle of it, too.

Florida's Mullen had to be pulled away several times and was so irate by the end of the exchange that he came back out of the tunnel for a rousing curtain call from the home crowd.

It all started when Missouri's Trajan Jeffcoat delivered a late hit on Florida quarterback Kyle Trask after he released a desperation pass at the end of the second quarter. The ball fell incomplete, and Trask landed hard on his back. His linemen came to his defense. So did Mullen, who started screaming at the officials and the opposing sideline.

Mullen was already seething over what he believed were several missed calls in the opening 30 minutes of play.

Players from both teams and benches converged near Missouri’s sideline, and wild punches could be seen flying from different directions.

The rest of the teams were given unsportsmanlike conduct penalties, meaning another one would result in an ejection.

Fans chanted Mullen’s name as he came back out for the third quarter.