Missouri tries to finish on high note against Arkansas 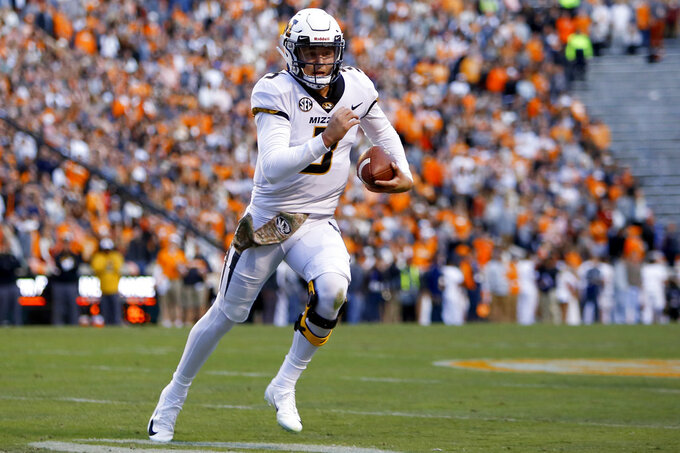 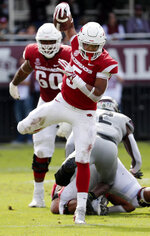 The senior class that arrived at Missouri four seasons ago was joining a program that had reached back-to-back SEC title games, one that had surpassed just about every expectation after it bolted from the Big 12 for the powerhouse conference.

They've experienced the collapse of the program, the hiring of a new coach in Barry Odom, and now the return of the Tigers to prominence heading into their regular-season finale on Friday.

What better way to go out than with a win over rival Arkansas?

"We've gone through a lot," said Odom, who won just four games his first season and seven last season, but has a chance to finish 8-4 and perhaps make a New Year's Day Six bowl game with a win over the Razorbacks. "There's been some lows and some highs and they've been able to hold tight together and hold true to them, and that's going to help them down the road."

The Tigers (7-4, 3-4 SEC) are certainly finishing strong. They've followed a 0-4 start to league play by beating Florida, Vanderbilt and Tennessee — two of those games on the road.

Their winning streak has coincided with standout performances by senior quarterback Drew Lock, who began the year as a Heisman Trophy candidate before a rough stretch. He's thrown for at least 250 yards and seven total touchdowns the past three weeks, sending his draft stock soaring.

Some believe he could be the first quarterback selected when April rolls around.

"To Drew's credit, he started believing in who he is and what he's capable of becoming," Missouri offensive coordinator Derek Dooley said, "and he's stayed the course."

The Razorbacks (2-9, 0-7) hope to the spoil party and provide first-year coach Chad Morris with a victory upon which he can build. Arkansas took Ole Miss, Texas A&M and LSU down to the wire, but wins have been painfully hard to come by outside of games against Tulsa and Eastern Illinois.

Like a win over the Tigers in their annual rivalry game.

Missouri running back Damarea Crockett grew up in Little Rock and wasn't offered a scholarship by his home-state team, so to say that he's craving an opportunity to play the Razorbacks would be an understatement. And not even an ankle injury sustained in last week's win over Tennessee is expected to keep him out.

"I'm just trying to swallow that pride," he said.

Tigers tight end Albert Okwuegbunam, a finalist for the John Mackey Award, has missed more than two games with a shoulder injury. He practiced a bit this week and could play, though Odom has promised not to jeopardize his future by rushing him back.

FLIRTING WITH THE ENEMY

Arkansas defensive backs Kamren Curl and Ryan Pulley are suspended for this week's game after they were flirting with Mississippi State cheerleaders rather than warming up with the team last week. Both of them are starters.

"That's not something I would do, but some people have different focus," Razorbacks linebacker Dre Greenlaw said. "I just hope everybody considers the seniors for this last game and plays their all, gives their all."

The Tigers are 21-point favorites to beat Arkansas, and a closer look at where the Razorbacks rank statistically explains why. They are No. 113 nationally in total offense and No. 82 in total defense.

"I'm not worried about what their record is or isn't," Odom said. "We need to prepare really, really well. They have good players, a really good staff. We know we'll get their best shot. We need to prepare and go play our game."

Odom wanted the stands packed on Senior Day, so he vowed to buy a ticket with his own money for anybody wanting to attend a game on the day after Thanksgiving. More than 1,000 tickets have been ordered and paid for by him.