No. 15 UTSA's perfect season ends in blowout at North Texas 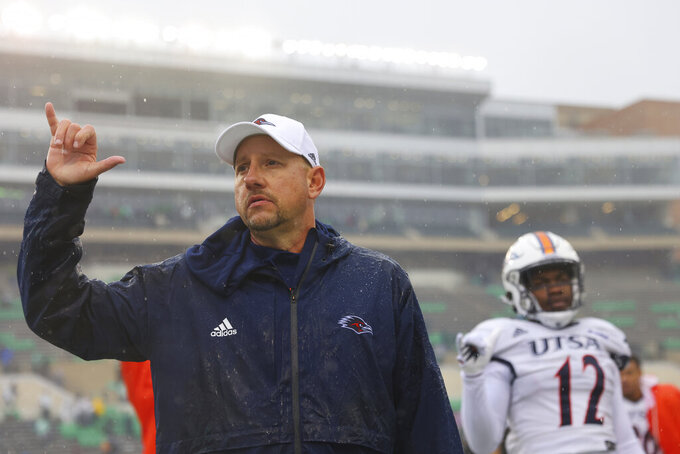 DENTON, Texas (AP) — An undefeated season slipped away from No. 15 UTSA on a rain-soaked Saturday in the Dallas area.

Whether it was losing three fumbles early with a slick ball or playing a hot opponent a week after staying perfect on a last-second touchdown, UTSA coach Jeff Traylor sensed the odds getting worse.

North Texas backs DeAndre Torrey and Ikaika Ragsdale combined for five touchdowns while UTSA quarterback Frank Harris had two turnovers and didn't play after halftime in the Mean Green's 45-23 rout of the Roadrunners.

“I think human nature is we probably weren’t as juiced up as we were last week,” Traylor said, referring to a 34-31 victory over UAB. “But it wasn’t like a bad effort. They were at a 10 and we probably played at an eight. And you turn it over three times in the weather, you’re going to get embarrassed, which we did today.”

UTSA (11-1, 7-1 Conference USA), which never started with more than five consecutive wins in the program’s first nine FBS seasons, is still hosting the conference championship game Friday night against Western Kentucky, which beat Marshall 53-21 with the East Division's spot on the line.

No. 1 Georgia and fourth-ranked Cincinnati are the remaining undefeated FBS teams.

“Nobody wanted to go undefeated more than we did,” Traylor said. “So that hurts terribly bad. But we still have everything to still play for.”

The Roadrunners, ranked 10th nationally in rushing defense, had given up six touchdowns on the ground all season. North Texas (6-6, 5-3) matched that late in the third quarter of a fifth consecutive victory that followed a six-game losing streak.

The Mean Green earned bowl eligibility in the first game involving a Top 25 team at their 10-year-old stadium.

“This is the biggest win I’ve had and we’ve had as a program,” said sixth-year coach Seth Littrell, whose future was in question when his team was 1-6. “Just a ranked opponent coming in here and us needing that win to get bowl eligible.”

Ragsdale, a redshirt freshman, had a career-high 146 yards and two touchdowns as North Texas' conference-leading rushing offense finished with 340 yards a week after UTSA allowed its previous season high of 220 in a last-second victory over UAB.

Torrey's third and final TD run was a spectacular 19-yarder where he broke a tackle in the backfield and dashed between two more defenders while still behind the line. He finished with 108 yards, easily outplaying UTSA's Sincere McCormick (60 yards) in a matchup of two of the top 10 active career rushers in FBS.

The Roadrunners were called for pass interference on their first defensive play, fumbled the kickoff after North Texas drove to an opening field goal and muffed two punts, losing possession on the first. UTSA had six fumbles overall.

“I did my best to get those guys ready,” Traylor said. “And I didn’t get them ready. We’re extremely embarrassed by our performance.”

Harris' 69-yard touchdown run pulled UTSA within 17-13 in the second quarter, but the senior later lost a fumble when he dropped the slick ball trying to make a quick throw on third down. Torrey's dazzling 19-yard score came two plays later as part of 28 consecutive points for UNT.

Josh Adkins replaced Harris to start the second half, but the Roadrunners were hopelessly behind before the offense finally got moving again on a 56-yard run by Brenden Brady early in the fourth quarter.

UTSA: Regardless of the wet conditions, the Roadrunners didn't protect their quarterbacks. The Mean Green had five sacks of Harris and Adkins, and both were running from quick pressure plenty of other times.

North Texas: Littrell probably secured his immediate future after UNT improved to 2-47 against ranked opponents. The only other victory was 14-9 over No. 20 San Diego State on Nov. 2, 1974, at old Fouts Field, which was across the interstate from Apogee Stadium. Littrell is 37-37.

Six weeks after earning the first ranking in program history, UTSA would appear to be in line to stay in the poll at least another week. The College Football Playoff rankings are another story. The Roadrunners were snubbed the first week and No. 22 on the current list. They're likely to be unranked again.

Traylor said Harris' health wasn't the reason Adkins took over in the second half. But he was evasive about the status of his starter going forward.

UTSA: The Roadrunners beat the Hilltoppers 52-46 on the road in October to reach 6-0 for the first time in program history.

North Texas: The Mean Green will await word on a bowl bid that wasn't even a consideration a month ago.