No. 17 Iowa waiting to reveal starting QB in Outback Bowl 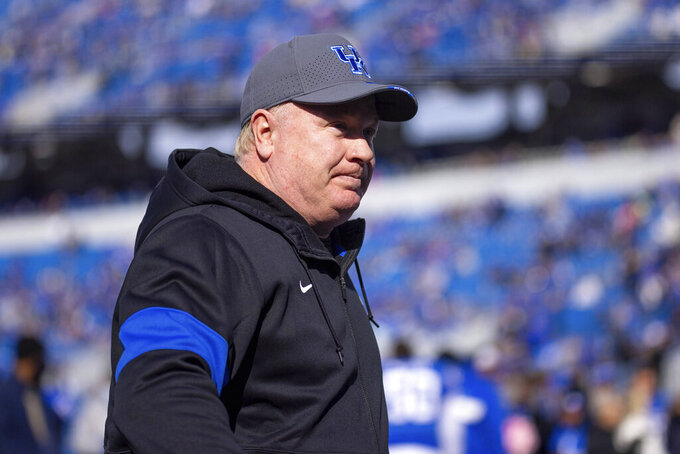 FILE - Kentucky head coach Mark Stoops waits for his senior players to come out during Kentucky's senior day celebration before an NCAA college football game against New Mexico State in Lexington, Ky., Saturday, Nov. 20, 2021. Kentucky will be trying for a rare 10-win season when the Wildcats play Iowa in the Citrus Bowl. (AP Photo/Michael Clubb, File)

ORLANDO, Fla. (AP) — When it comes to being coy about personnel in order to gain a tactical advantage, clearly it’s like father, like son in the Iowa football program.

Following a week of preparations for Saturday’s Citrus Bowl in which Hawkeyes’ offensive coordinator Brian Ferentz repeatedly refused to name a starting quarterback, head coach Kirk Ferentz coyly did the same on Friday.

No. 17 Iowa (10-3) heads into its showdown against No. 25 Kentucky (9-3) without a definitive, named starter under center — a somewhat odd occurrence for a 10-win team that climbed as high as No. 2 in the country in early October before a midseason tumble.

“I guess you’ll know at one o’clock (on Saturday) – probably before that, actually,” the elder Ferentz said of Iowa’s choices at quarterback between junior Spencer Petras and sophomore Alex Padilla — both of whom earned starts this season. “I really don’t think it’s that big a deal. I know it is to everybody, but we have faith in both guys. Our goal is to play good team offense, hopefully move the ball and score some points.”

Petras was Iowa’s starter much of the past two seasons before he suffered a midseason shoulder injury that opened up an opportunity for Padilla to start three games. Petras, who threw for 1,669 yards and nine touchdowns, returned as the starter late in the season, but he was injured again in the Hawkeyes’ 42-3 loss to Michigan in the Big Ten title game.

Iowa was forced to depend on its stout defense after its offense struggled much of the way — regardless who was at quarterback. The Hawkeyes ranked 123rd in the nation in total offense (297.5 yards), 97th in scoring (23.9 points) and 117th in pass completion percentage (54.3%). Those woes were prominent factors in Iowa plummeting following a promising 6-0 start and its highest ranking (No. 2) in 36 years.

“This is a position that I relish,” Brian Ferentz said of Iowa not revealing its starting quarterback to the opponent. “We have pretty much made our mind up on what we are going to do. But, the reality is we feel comfortable with both guys and feel both give us a chance to win.”

Kentucky, which is trying to become just the fourth team in school history to get to 10 wins, has no such uncertainty at quarterback. Junior Will Levis started all 12 games and threw for 2,593 yards and 23 touchdowns. He is hopeful Kentucky can pick up on Saturday against Iowa’s defense where it left off after winning the final three games of the regular season.

Kentucky head coach Mark Stoops will be in the unique position of facing his alma mater. Stoops, the brother of Hall of Fame coach Bob Stoops, not only played defensive back at Iowa from 1986-88, but he was on the team while Kirk Ferentz was the Hawkeyes’ offensive line coach (1981-89).

“I have known Coach Ferentz for a long time in the Hawkeye program, being that I’ve played there. So, obviously I’ve followed them very closely and have great respect about the way they play and the way they are coached,” said Stoops, who is 58-53 in nine seasons as head coach at Kentucky.

Ferentz said a secondary that led the way in Iowa recording a school-record 24 interceptions will be without defensive backs Matt Hankins, Terry Roberts and Xavior Williams because of injuries. Iowa standout tailback Tyler Goodson is sitting the game out to prepare for the NFL Draft.

Stoops said senior defensive end Josh Paschal, who has five sacks, aggravated a previous injury in the Nov. 27 win over Louisville and is “highly questionable” to play.