No. 18 Oklahoma looks for rebound vs Dykes, undefeated TCU 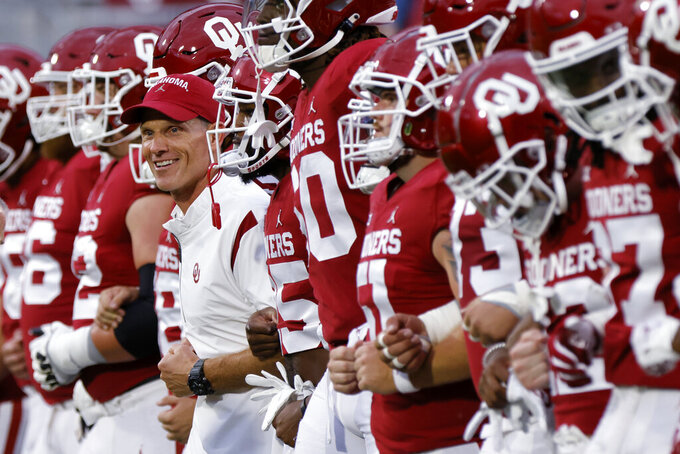 FORT WORTH, Texas (AP) — Brent Venables went through the emotions of frustration and anger after his first loss as Oklahoma's head coach. It felt no different than losses he experienced as a national championship-winning defensive coordinator, first with the Sooners and more recently with Clemson.

“I've always beared the responsibility of failure and losing. It's no different. I'm responsible for a part of the team,” Venables said. “But also, trust in how you do what you do. You don’t have to reinvent the wheel. Sometimes you’re on the right side of it and sometimes you’re not. It certainly doesn’t take much to be on the wrong side of it.”

No different than when the 18th-ranked Sooners (3-1, 0-1 Big 12) are winning, Venables knows there has to be perspective, composure and leadership skills as they go play at TCU on Saturday. Oklahoma has lost consecutive regular-season games only once since 1999.

The Horned Frogs (3-0) play their Big 12 opener a week after wrapping up non-conference play with a 42-34 win at longtime rival SMU, where Sonny Dykes was the last four seasons before becoming TCU's coach.

Oklahoma fell behind 14-0 early and never got ahead in its Big 12 opener against then-unranked Kansas State, which was coming off a home loss to Tulane before winning for the third time in the past four meetings. The Sooners tumbled 12 spots in the AP poll after starting conference play with a loss for only the second time in 10 seasons.

“At any program that's winning a bunch, just got that rep of winning a bunch of games or championship caliber, it's not something anyone's used to,” said first-year Sooners quarterback Dillon Gabriel. “You gotta move forward."

TCU leads the Big 12 by gaining 8.1 yards per offensive play, which is second nationally.

Max Duggan has the nation's best passing efficiency rating, completing 77% of his passes (47 of 61) for 695 yards with eight TDs and no interceptions. He returned to starting quarterback after former Oklahoma transfer Chandler Morris sprained his left knee in the opener, though Dykes indicated this week that Morris was close to returning.

Running back Kendre Miller has averaged 7.1 yards per carry in his career, best nationally among active Power Five players. Second on that list is the 6.8 by former TCU running back Zach Evans, who transferred to Ole Miss after last season.

Gabriel, a transfer from UCF, has thrown for 1,089 yards and a conference-high 11 touchdowns without an interception for the Sooners. He goes against some familiar faces after throwing for 330 yards and four TDs in his first Big 12 game.

TCU linebacker Johnny Hodges, whose 15 tackles matches Perry for the TCU lead, was at Navy the past two seasons in the American Athletic Conference with UCF. Dykes was also in that league, though Gabriel didn't play against SMU in that span.

“He looks the same, he looks like he did at Central Florida, and he was obviously very, very good in that offense.” Dykes said. “I think he’s very comfortable with what he’s doing. I think the offense plays to his strengths as a passer.”

Oklahoma's new offensive coordinator is Jeff Lebby, who was with Gabriel at UCF in 2019 and joined the staff at his alma mater with Venables after two seasons at Ole Miss.

Oklahoma receiver Marvin Mims is second in the Big 12 with 129.5 all-purpose yards per game. He is the only non-running back among the top five. His 18 catches for 397 yards put him third in the Big 12 with 99.3 yards receiving per game, and he also has three TD catches. His six punt returns have averaged 19.7 yards, which is fourth nationally.

Oklahoma is 10-1 in the series since TCU joined the Big 12 in 2012. The Sooners have won the last six by an average margin of nearly 26 points a game. ... Dykes is the first TCU coach to win his first three games since Francis Schmidt in 1929. Dykes is the school’s 12th full-time coach since Schmidt. ... The Sooners have three of the Big 12's top four tacklers. Linebackers Danny Stutsman (8.75 per game) and David Ugwoegbu (8.5) rank second and third, with OU safety Billy Bowman (8.25) fourth.