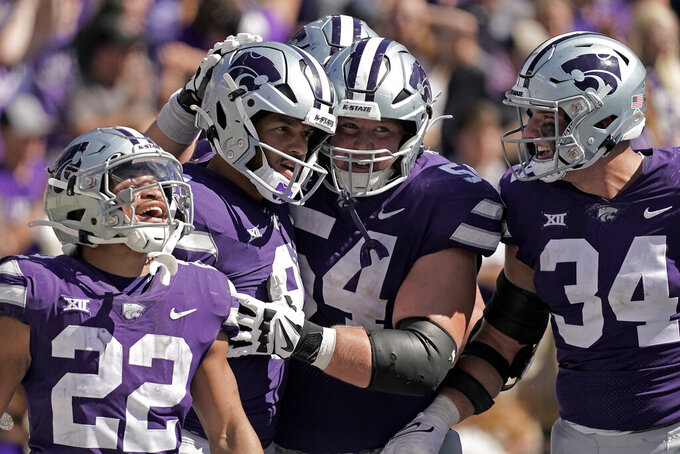 Line: Kansas State by 2, according to FanDuel Sportsbook.

Kansas State looks to continue its roll to start Big 12 play. Iowa State is trying to avoid its worst Big 12 start since Matt Campbell's first Cyclones team lost six straight to open conference play in 2016. K-State's Adrian Martinez is the hottest dual-threat quarterback in the country. He'll get tested by a defense that leads the Big 12 in all major categories.

Kansas State RB Deuce Vaughn vs. Iowa State front seven. Vaughn leads the Big 12 and is fifth nationally with 117 yards per game and is coming off a career-high 170-yard outing against Texas Tech. His presence opens space for Martinez to do his thing. The Cyclones haven't allowed a 100-yard rusher in seven games since last season.

Kansas State: TE/FB Ben Sinnott is emerging as a key piece of the offense. His four catches for 80 yards against Oklahoma were career highs, and three went for at least 20 yards. Sinnott has a catch in all five games after having just two last season.

Iowa State: WR Xavier Hutchinson had 13 catches against Kansas last week and his 49 for the season are 14 more than the next closest Big 12 receiver. He's well past halfway to his 2021 total of 83.

Martinez and Vaughn are the top quarterback/running back rushing duo in the nation, combining for 1,107 yards. Vaughn has 638 rushing yards to rank third in the nation and Martinez is 22nd with 469 yards. The two each had 100-yard games the last two weeks, the first time in program history the Wildcats have had double 100-yard performances in consecutive games. ... Linebackers account for four of K-State's Big 12-leading nine interceptions. ... Campbell said the status of injured RBs Jirehl Brock and Cartevious Norton would be determined late in the week. ...Hutchinson has had at least one catch in all 30 of his games for the Cyclones.