No. 4 Alabama wants to keep streak alive vs rival Tennessee 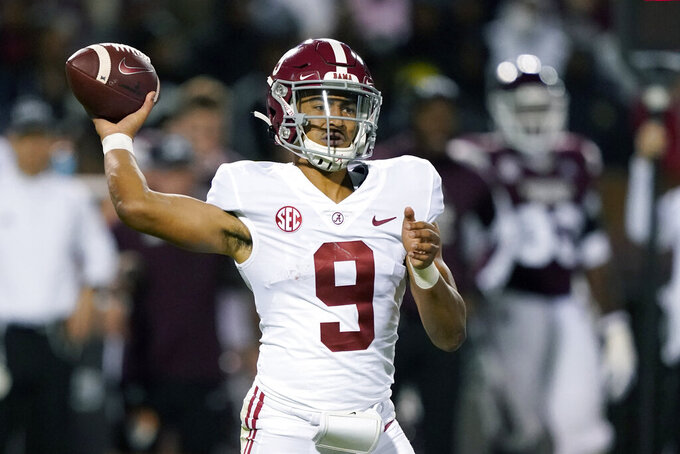 The Alabama-Tennessee series has been one-sided since Nick Saban arrived in Tuscaloosa, but don't ask him if it still qualifies as a rivalry.

The fourth-ranked Crimson Tide's 14 wins in a row in what was traditionally a Third Saturday in October staple hasn't changed the passion level entering Saturday night's meeting.

It's still a meaningful rivalry to Saban, and to fans on either side.

“You can say it however you want to say it, but it’s significant if you don’t have success in the game, because it’s significant to a lot of people,” the Tide coach said. "And whatever happened in the last however many years will have no impact on this game at all. The only thing that matters is what happens now.

“For now, this week, it’s a rivalry game to me and I hope it is to everybody in our organization.”

Alabama (6-1, 3-1 Southeastern Conference) is a 24.5-point favorite but the Volunteers (4-3, 2-2) have enjoyed a resurgence in coach Josh Heupel's first season.

Tennessee had a two-game winning streak snapped with a 31-26 loss to No. 12 Mississippi that garnered more attention for the behavior of unruly fans throwing objects onto the field.

Alabama safety Jordan Battle has been around long to know what the rivlary means to alumni and other fans.

“We know how rich in history this rivalry game is,” Battle said. "We just hope to give the fans what they want to see.”

Heupel has described Tennessee quarterback Hendon Hooker as day to day after Hooker couldn't put any weight on his right leg leaving the field late in the Ole Miss game. If he can't go, then Joe Milton would be in line to start for the first time since a loss to Pittsburgh when he left that game with an injury.

Hooker has thrown 14 TD passes and run for four others and is nursing a streak of 116 consecutive passes without an interception.

The Volunteers face another quarterback capable of running even if he doesn't do it often. Matt Corral scorched them for 195 rushing yards last weekend. Now comes Alabama's Bryce Young, who's less of a runner but still mobile.

“Bryce Young is a little different,” Tennessee defensive end Byron Young said. "He is more of a pocket passer, so you know we are looking for the run but most times he just stays in the pocket.”

Both defenses can deliver negative plays.

Alabama is coming off a seven-sack performance against Mississippi State, with Will Anderson recording four of them. He also leads the SEC with 15 tackles for loss.

Tennessee leads all Power Five teams with 62 tackles for loss, led by linebacker Jeremy Banks, who is second in the SEC. The Vols also have forced 10 turnovers over the past five games with eight interceptions.

Saban said Alabama linebacker Drew Sanders is “doubtful” after missing the last two games with a hand injury. The Tide coach is “hopeful” defensive lineman Byron Young (shoulder) will be able to play.

CROSSING THE BORDER Alabama linebacker Henry To'oTo'o is a former Tennessee standout. Vols defensive back Brandon Turnage played for the Tide for two seasons before transferring in July.

“Me and BT speak every day, he’s one of my best friends," Battle said. "We have a longlife relationship. I’m very happy for him. I’m proud of him.”