No. 5 Georgia ranks as 'best team UMass has ever played' 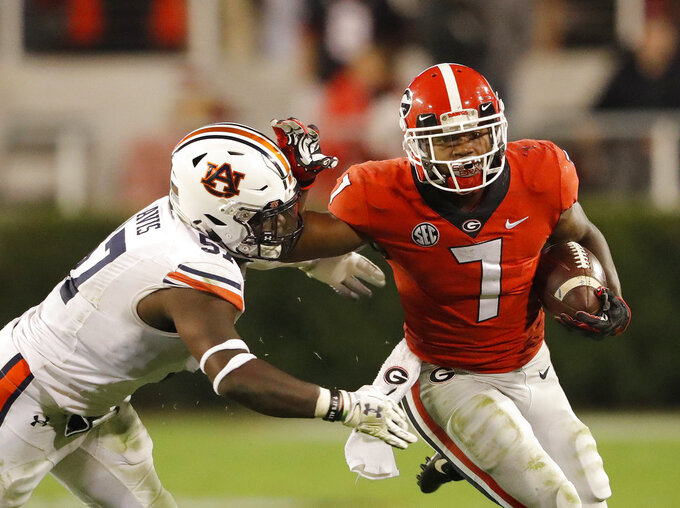 ATHENS, Ga. (AP) — In Mark Whipple's two stints as the UMass coach covering 11 years and time spent in FCS and FBS, No. 5 Georgia is his pick as the Minutemen's toughest opponent.

Whipple says he didn't even have to pass along that opinion to his players.

Added Whipple of the challenge facing UMass (4-7) in Saturday's game: "We'll give it our best shot."

Georgia (9-1, No. 5 CFP) already has won the Southeastern Conference's Eastern Division and a spot in the Dec. 1 SEC championship game in Atlanta against No. 1 Alabama. The Bulldogs' focus against UMass and in next week's final regular-season game against Georgia Tech is to avoid a misstep that would devastate their chances for a return trip to the College Football Playoff.

"There's no question we hope they're overlooking us and trying to get ready for Georgia Tech," Whipple said.

The Bulldogs opened as 45-point favorites against UMass. The line dropped to a still-daunting 41 points, a number which reflects the Minutemen's task of containing such playmakers as quarterback Jake Fromm, tailbacks D'Andre Swift and Elijah Holyfield, and wide receivers Riley Ridley and Mecole Hardman.

"They don't have any weaknesses," Whipple said. "They were one play away from winning the national championship game last year and they might have a better team. I think they're deeper."

Georgia coach Kirby Smart is confident his team will avoid looking past UMass, which is 0-8 against SEC teams but lost to Mississippi State and Tennessee by only a combined 15 points last season.

The talent equalizer for UMass is wide receiver Andy Isabella , who ranks second in the nation with 87 catches for 1,479 yards. Isabella stays busy while lining up in different spots.

Smart said Isabella is "one of the best receivers in all of college football. Our kids respect him."

Here are some other things to know about the UMass-Georgia game:

The Minutemen can score quickly. They've scored on 12 scoring drives lasting no longer than 60 seconds. They're tied for eighth in the nation on such drives.

Fromm is challenging Hutson Mason's completion percentage record of 67.9 set in 2014. Fromm has completed 67.5 percent of his passes to rank second in the SEC.

Whipple said he has seen Fromm falter only in Georgia's loss to LSU, when he completed only 16 of 34 passes with two interceptions.

"Other than that he's been really good," Whipple said, adding Fromm is "a calm and collected guy."

UMass lost at Boston College 55-21 on Sept. 1 in its only game this season against a Power Five team. It is coming off a 35-16 home loss to Brigham Young.

Fromm said last week's 27-10 win over Auburn proved the offensive line did its job, even when backups were on the field.

"Auburn had a Sunday-type caliber defensive line," Fromm said. "Our guys did a really good job with those guys moving them."

Swift ran for a career-high 186 yards, including a 77-yard touchdown.