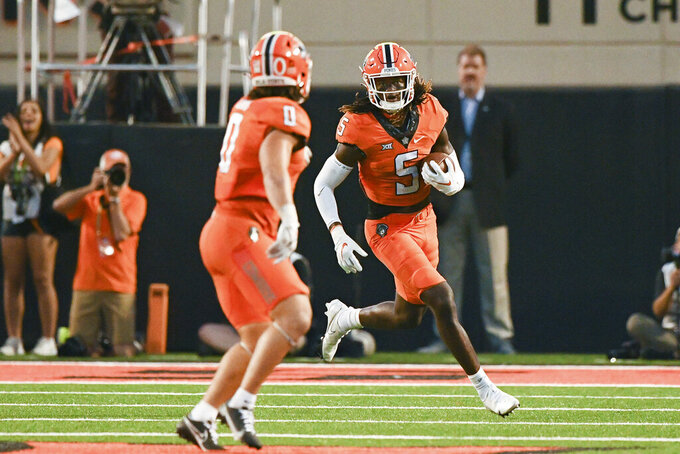 MANHATTAN, Kan. (AP) — Kansas State hopes to know late in the week whether it will have Adrian Martinez under center when the No. 22 Wildcats play ninth-ranked Oklahoma State in a game that could help decide who plays in the Big 12 championship game.

Martinez barely played last week at TCU, when the Wildcats (5-2, 3-1) blew a 28-10 lead in a loss to the Horned Frogs that left them fighting for second place in the conference race. They are tied with Oklahoma State (6-1, 3-1), which also has lost to TCU, and that means the winner Saturday will have a big advantage in the race for a title-game rematch.

“Injuries? It’s part of (the game),” said Kansas State coach Chris Klieman, whose team has experienced more than its share this season. “That’s why you got 85. We got other guys who can come up and play. We’ll be OK.”

“The thing about it is our kids knew that they had an opportunity to win the game no matter who was playing,” Klieman said of last week's loss. "We just didn’t make plays. We’re not going to make excuses on who’s playing injuries or not. We’re going to get them ready and we got a tough one against Oklahoma State. We’ll be ready.”

Will Howard threw for 225 yards and two touchdowns in place of Martinez against the Horned Frogs, and the backup would be first up against the Cowboys if the Wildcats' starter can't play. Howard has been dealing with a sore shoulder, though, which briefly forced third-stringer Jake Rubley into last week's game.

The Cowboys faced their share of adversity on the field last week, trailing Texas by 10 late in the third quarter. But they calmly rallied behind quarterback Spencer Sanders, whose two fourth-quarter TD passes lifted them to a 41-34 victory and kept them in prime position to land a spot in the Big 12 title game with five left on the schedule.

“We ended the game with six freshmen playing on defense there towards the end. I know at kickoff we had nine guys running down the field that had never played college football, basically,” Oklahoma State coach Mike Gundy said. “We had a lot of guys that were banged up, nicked up, and we had to put some other guys into play. It is what it is.”

Kansas State PK Chris Tennant has missed three of his past four field-goal attempts, including two at TCU that could have helped trim the deficit in the second half. P Ty Zentner and freshman PK Leyton Simmering could get a chance Saturday.

“The thing with specialists is always staying ready to go,” Zentner said. “Whoever he rolls out there will be confident.”

Wildcats DE Felix Anudike-Uzomah has been nursing injuries most of the season, while DBs Josh Hayes and Julius Brents were limited last week against the Horned Frogs. LB Daniel Green left the game with an injury and could be out this week.

The Cowboys are No. 1 in the FBS in fewest penalties with 27 through seven games, and they had no penalties last week against Texas for the first time in program history. Kansas State is No. 13 nationally in penalty yardage at 269.

The Cowboys defense is allowing 25.5% of third down conversions, the fourth-best mark in the FBS, and that proved crucial in last week's game against Texas. They trailed 31-24 at halftime but allowed just a field goal in the second half.

“We don’t want to argue with each other,” Oklahoma State defensive tackle Collin Clay said. “We just stayed calm and told each other the game wasn’t over, we still got another half to play. We made the corrections that we needed to make.”

Texas ran for 204 yards and two touchdowns, averaging 6.4 yards per carry. That should bode well for the Wildcats, who are averaging 232.1 yards on the ground per game, the 11th-best total in major college football.

“The bad news is we didn’t get the communication right," Gundy said. "The good news is we should be able to fix that.”