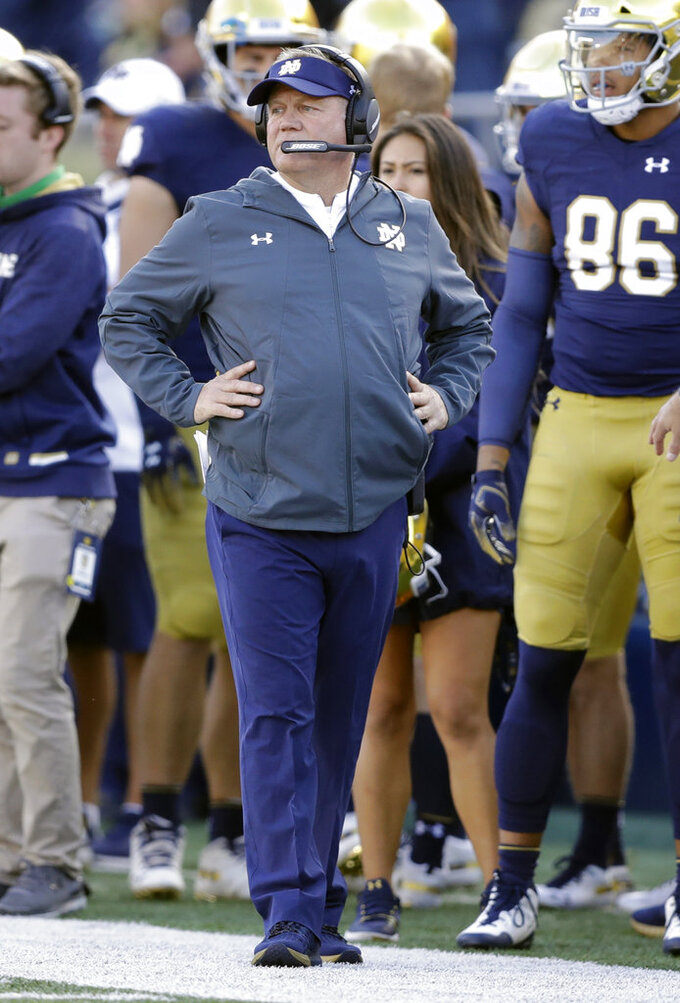 FILE - In this Oct. 13, 2018, file photo, Notre Dame head coach Brian Kelly watches during the second half of an NCAA college football game against Pittsburgh, in South Bend, Ind. Brian Kelly is The Associated Press college football Coach of the Year, Monday, Dec. 17, 2018, becoming the third coach to win the award twice since it was established in 1998. (AP Photo/Darron Cummings, File)

"Offensive line and defensive line (were) really the immediate focus," Kelly said. "We were looking for length and athleticism on defense, and then, from an offensive standpoint, continue to build speed on the perimeter."

The class is ranked in the top 15 in the 247 Sports composite rankings.

"Mid-year enrollment has been very effective for us," Kelly said. "We can get them ready to play as true freshmen."

Kelly indicated the Irish have some flexibility to add more recruits in February. Brian Polian, the recruiting coordinator and special teams coach, said he likes how this class fits with others.

"One of the things that is really exciting is we're starting to stack some really good classes on top of each other," said Polian, who indicated that this class was pretty well in place before Notre Dame made its run to the Cotton Bowl semifinal Dec. 29. "This class was solidified in the summer and early fall. Winning is great but it's not as if guys were jumping to us late because we got on a little bit of a roll."