Oregon gets boost to recruiting class by adding Jones 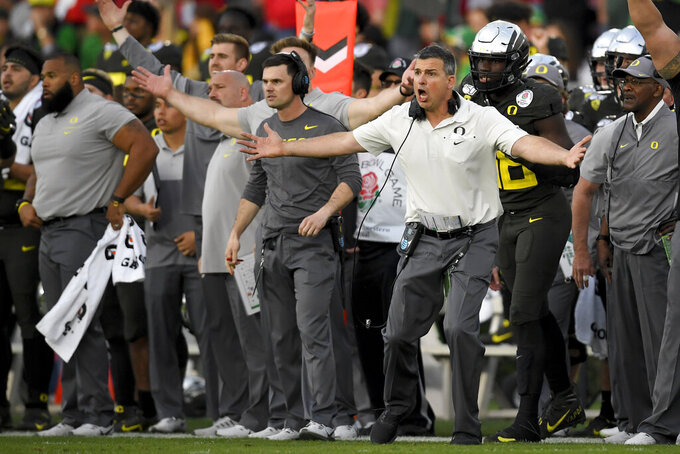 Oregon locked up most of its stellar recruiting class during the December early signing period.

The Ducks got a huge boost on national signing day — literally.

Jayson Jones, a 6-foot-6, 340-pound defensive lineman, announced Wednesday he signed with the Ducks after initially committing to Alabama.

Jones, from Calera, Alabama, opted not to sign with the Crimson Tide in December to explore his options. He decided the best one was to play for Mario Cristobal in Eugene.

“The journey has been long, 3 years to be exact,” Jones said on Twitter. “It's been a lot of fun, but everything comes to an end. I've done a lot of meditating, praying and I've made my decision. I will be attending the University of Oregon.”

Coming off a Rose Bowl victory over Wisconsin, the Ducks pulled in the nation's No. 12 recruiting class, according the 247Sports composite.

“Massive human being, knock-kneed with length and bulk,” 247Sports director of scouting Barton Simmons said. “Really effective as a space eater in high school. Difficult to move. Nimble and athletic for a big-bodied kid. Capable of collapsing the pocket when he wants to. Has the length to disrupt throwing lanes."

Even when Arizona State was criticized for hiring former NFL coach and TV analyst Herm Edwards three years ago, there wasn't much doubt the loquacious coach would be able to recruit.

Edwards and the Sun Devils had another solid recruiting run in 2019-20, landing the nation's 24th recruiting class and fourth in the Pac-12. Arizona State signed a program-record 10 top-100 recruits and had a superb recruiting year in California, landing 12 players from the neighboring state.

“Home base is Arizona. First base is California,” co-defensive coordinator and recruiting coordinator Antonio Pierce said. "We did hit a home run in California."

The Sun Devils got a boost on Wednesday's signing day, when tight end Jake Ray flipped on his commitment to UNLV to head to the desert.

Southern California was once one of the top recruiting programs under former coach Pete Carroll.

The Trojans slipped this year under Clay Helton, landing a 13-player class that was 54th nationally and 10th in the Pac-12.

USC has no five-star recruits and just two four-stars: receiver Gary Bryant, Jr. and offensive lineman Jonah Monheim. The Trojans also did not sign a quarterback, but should be in good shape with Kedon Slovis coming back.

Stanford coach David Shaw had a strong recruiting class going through the early signing period in December and bolstered it on national signing with the addition of four players.

The class that includes six four-star players is No. 21 nationally and third in the Pac-12.

“Adding some guys we were hoping on,” Shaw said. “Some of the guys we knew were coming, some we got some good news in the last week and a half or so.”

Since joining the Pac-12 in 2011, Utah had never finished higher than 33rd nationally.

Coach Kyle Whittingam changed that his year, signing a class that includes four four-star recruits and was 29th nationally.

Cornerback Clark Phillips III, who signed in December, is the marquee player in the class, coming in as the highest-rated recruit in school history.

Utah signed 10 players from Utah, including five of the top six recruits.

“We're excited about that, keeping those guys home, for the most part,” Whittingham said. “You're never going to keep every one of them home, it's just not realistic, but we did a good job of keeping a lot of talent in the state.”