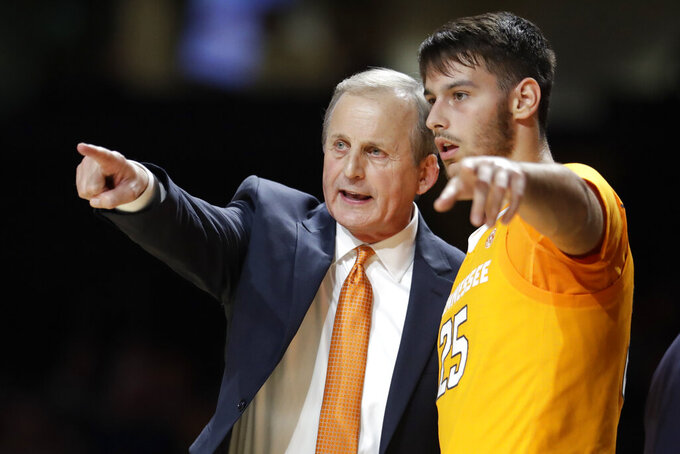 FILE - In this Saturday, Jan. 18, 2020, file photo, Tennessee coach Rick Barnes talks with guard Santiago Vescovi, of Uruguay, during the second half of the team's NCAA college basketball game against Vanderbilt in Nashville, Tenn. With competition canceled across all NCAA divisions due to the coronavirus, many foreign athletes face a dilemma, return home or stay. Tennessee's men’s basketball team has players from France, Serbia, Uruguay and Finland, which meant Mary-Carter Eggert, the director of basketball operations, became a travel agent, looking for the best flights. (AP Photo/Mark Humphrey, File)

Canceling March Madness because of the coronavirus pandemic will cost the NCAA about $375 million that it would have distributed to 350 schools across the nation.

Some will be able to absorb the losses better than others.

The NCAA announced Thursday it will distribute $225 million to its Division I member schools in June, nearly two-thirds less than the $600 million scheduled to be handed out in installments from April to June.

Schools that compete in the wealthiest conferences, with billion-dollar television contracts fueled by major college football, might not notice much of a difference in the short term.

Schools competing in mid-major conferences are preparing to make sacrifices.

“This is a very teachable moment,” Mid-Eastern Athletic Conference Commissioner Dennis Thomas said. “That’s what athletics is about, when you’re confronted with unexpected situations and you have to overcome them.”

But that could prove challenging.

Southwestern Athletic Conference Commissioner Charles McClelland said the NCAA distribution is primarily how his member schools fund summer school and other academic support for their athletes. McClelland acknowledged that SWAC schools have dealt with APR issues in the past.

“From a conference office standpoint, we have to find innovative ways of assisting our schools in order to compensate for the lack of resources so we can continue the forward progression that we have in increasing our graduation rates and staying out of that APR threshold to where we’re not able to meet the minimum standard,” McClelland said. “We’ve made tremendous strides in the past. This is definitely a bump in the road, but we’re committed from a conference standpoint to assist schools in making sure we continue our forward progression.”

Thomas applauded the NCAA for being fair and balanced “across the board from Power Five to FCS institutions.”

Ohio State President Michael Drake, chairman of the NCAA board of governors, said the association will undertake cost-cutting measures to be determined in the upcoming weeks. He did not provide details.

“The association has prepared for a financial catastrophic event like the one we face now,” Drake said. “While we certainly have challenges ahead, we would be in a far worse position had it not been for this long-standing, forward-focused planning.”

“Look at the breadth of the 90 championships and only maybe a half dozen that cover their own costs,” Shaheen said.

Shaheen said millions could potentially be saved on travel costs, amenities provided to athletes and maybe even cutting the number of teams selected to compete.

Big 12 Commissioner Bob Bowlsby said his 10-member league would have expected about $24 million from NCAA distributions. Instead, he estimated, the Big 12 will receive about $10 million.

“We’re going to take some hits there,” Bowlsby said.

Bowlsby said the Big 12 is likely to be down $15 million to $18 million this academic year in terms of revenue, but could tap reserve funds to meet conference distribution projections. Last year, the Big 12 distributed about $35 million to each of its member schools.

“We have some unknowns in our budget that remain and will probably remain for a while, but I expect that we will be able to make our members whole on what we forecast as this year’s distribution,” Bowlsby said. “It’s a whole new ballgame if we find ourselves not playing football because of this. It affects everything we do.”

At football powerhouse Clemson, NCAA Tournament revenue is generally 2% to 3% of its annual athletic budget, which is $134 million this year.

“It’s not an insignificant amount, but there have not been discussions to cut student-athlete services based on the announcement,” athletic department spokesman Jeff Kallin said.

The NCAA pulled in more than $1 billion in revenue last year, including $867.5 million from the television and marketing rights for the Division I men’s basketball tournament. But March Madness was canceled March 19, a week before the first round was scheduled to begin.

The NCAA said $50 million of the distribution will come from its reserve fund while a $270 million event cancellation insurance policy will help pay off the remaining distribution.

Some $53.6 million will be distributed to Division I schools through the Equal Conference Fund, which pays each conference about $1.6 million.

That, at least, was good news to Atlantic Sun Commissioner Ted Gumbart and nine A-Sun schools with athletic budgets that are a fraction of Clemson’s.

“That’s kind of the lifeblood,” Gumbart said. “That’s what we use to do business. So that is much more important for the A-Sun than it would be for the SEC or a Power Five conference.”

The remainder of the $225 million will be proportionally distributed through seven other funds. That’s where A-Sun schools and other mid-majors will take a big hit.

“We were expecting about $5.8 million dollars, and we’re going to get less than half of that,” Gumbart said. “It simply limits what we can provide to our schools.”