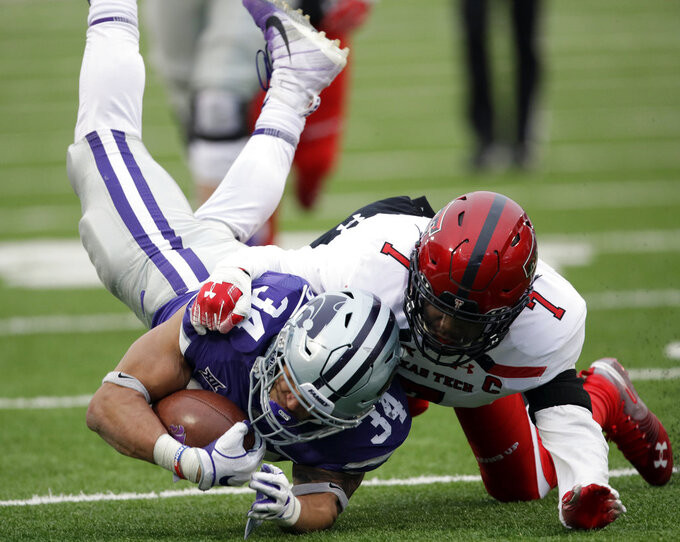 Kansas State running back Alex Barnes (34) is tackled by Texas Tech defensive back Jah'Shawn Johnson (7) during the first half of an NCAA college football game in Manhattan, Kan., Saturday, Nov. 17, 2018. (AP Photo/Orlin Wagner)

MANHATTAN, Kan. (AP) — Bill Snyder dodged every question that hinted at whether he had just coached his final home game at Kansas State, preferring instead to shower his seniors and defense with hard-won praise.

They certainly provided the Wildcats a throwback performance.

They held high-flying Texas Tech to 181 yards total offense, forced four turnovers and generally made life miserable for the Red Raiders on Saturday. Their comprehensive 21-6 victory, which also kept alive Kansas State's bowl aspirations, looked a lot like all those wins during the 1990s, when Snyder's defenses kept the Wildcats near the top of the college football hierarchy.

"I was really proud of our defensive players, our coaches. Pretty special," said the 79-year-old Snyder, who some believe could retire after this season. "Regardless of the win, the real effort of how we played was special."

Skylar Thompson returned from a concussion to throw for 213 yards and a touchdown, Blake Lynch hit four field goals and Alex Barnes added 136 yards rushing for the Wildcats (5-6, 3-5 Big 12), who topped the Red Raiders (5-6, 3-5) for the seventh time in their last eight meetings.

"You have to give them credit," Texas Tech coach Kliff Kingsbury said, "but we were not able to run the ball at all and the passing game was not very sharp. We were not very crisp."

Red Raiders quarterback Jett Duffy, who threw for 444 yards and four TDs last week against Texas, was just 19 of 27 for 150 yards and an interception. The sophomore also lost two fumbles while spending most of the game under constant pressure for the Wildcats' defensive front.

The Red Raiders had been averaging 383 yards passing, second-best nationally, but were essentially grounded by Kansas State on a cold, steel-gray afternoon.

"Everyone was doing their job. Everyone was executing," Kansas State linebacker Wyatt Hubert said. "I'm just proud of the way the defense came together and played how we're supposed to."

Clayton Hatfield hit a pair of fields to help Texas Tech to an early 6-3 lead, but the Wildcats soon pulled ahead late in the first half. They took over when Duffy lost his first fumble near midfield and needed seven plays for Thompson to find freshman Malik Knowles in the end zone for the score.

The Wildcats had trouble adding to their lead, though.

They marched to the Texas Tech 10 to start the second half before Barnes was stuffed on fourth-and-1. Kansas State blocked a punt out of the end zone moments later for a safety, but Thompson tossed an interception in the end zone a few minutes later to spoil a chance for more.

But the Red Raiders were even more impotent on offense.

They coughed up the ball when Duffy had his arm his hit while preparing to throw, and Kansas State turned that fumble into a field goal. Another promising drive ended when Duffy threw an interception to A.J. Parker deep in Kansas State territory, and the Wildcats tacked on another field goal.

They were still leading 18-6 when Texas Tech forced a punt with about 6 minutes left, and Kingsbury sent McLane Carter in at quarterback. The very first snap hit Carter in the knee and Kansas State pounced on yet another fumble to set up one final field goal.

"I thought they got after us," Kingsbury said, "seemed to play harder and took it to us. We knew they would be. I thought we had a good plan but I did not put us in position to be successful."

"That's not our team. Everyone in that locker room knows that's not us. It looks like one of the teams in the past. And we are very soft on all three phases. They just dominated us. Credit them for being prepared and playing a hard game." — Texas Tech defensive back Jah'Shawn Johnson.

Kansas State right tackle Dalton Risner thought he'd scored a touchdown on a lateral late in the game, but the officials reviewed the play and decided it was a forward pass. The illegal touching foul took away the TD and set up Lynch's final field goal.

Texas Tech has lost four straight and is in danger of missing out on a bowl game, and the offense was to blame in this one. The Red Raiders' 181 yards were their fewest since Sept. 14, 2010, against Texas, and it was the first time since 1997 that Kansas State held them without a touchdown.

Kansas State wasn't all about defense on Saturday. Barnes had his sixth 100-yard rushing game this season, the most since Daniel Thomas had seven in 2010. He also pushed his season total to 1,171 yards, which is the seventh-best single season in school history.