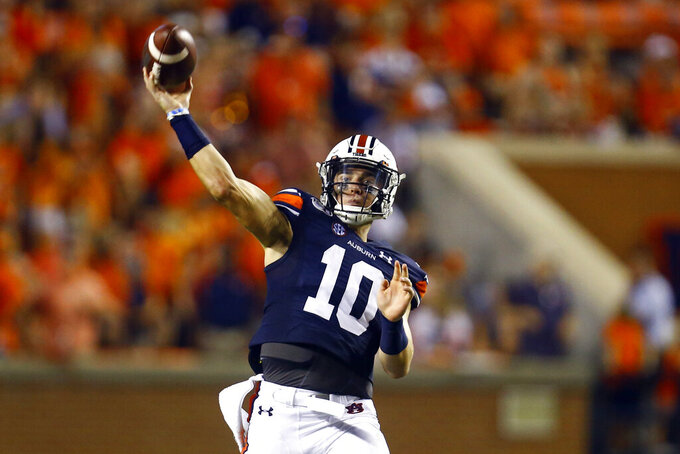 Auburn quarterback Bo Nix (10) throws a pass during the second half of an NCAA college football game against Mississippi State, Saturday, Sept. 28, 2019, in Auburn, Ala. (AP Photo/Butch Dill)

AUBURN, Ala. (AP) — Kyle Trask was a backup quarterback with four collegiate passes this time last year. That's still four more than Bo Nix, who was in high school.

Now, Trask is the starting quarterback for No. 10 Florida and Nix for seventh-ranked Auburn heading into a top 10 showdown Saturday in Gainesville, Florida. Both are trying to keep their teams in playoff contention.

Trask did what is expected of a Florida quarterback against Towson Saturday and he has been efficient since replacing an injured Feleipe Franks.

"You definitely get a better feel for the game with the more (repetitions) you get because at the end of the day that's the only way you can gain experience, real experiences with reps," the Gators junior said. "I'm obviously getting a lot more reps now in practice and I think it's helping me out a lot with things like timing with my receivers and really being able to gel with all those guys out there on the field."

Trask was pressed into action when Florida lost Franks to a season-ending ankle injury in the Kentucky game. He hadn't started a game since his freshman year of high school.

The Gators quarterback was 18-of-20 passing with a pair of touchdowns against Towson, and he ranks fourth nationally completing 77.3 percent of his passes. He threw for 293 yards against Tennessee in his first start. But, like Nix, Trask was also intercepted twice in his starting debut — his only two picks of the season. He set a school record with 18 consecutive completions over the past two games.

Nix is coming off his best performance for Auburn.

Against Mississippi State , Nix said he "was seeing things about as good as I've seen them at the college level."

Nix won the job entering his freshman season and responded with the game-winning touchdown pass against Oregon.

He completed 47 percent of his passes in the first two games and 70 percent in the last three. He hasn't thrown an interception since getting picked off twice in the opener against Oregon.

Nix is fresh from a 335-yard passing performance against Mississippi State when he also ran for 56 yards.

Florida coach Dan Mullen says the Gators staff had Nix rated "very close to the top" among quarterback prospects nationally. Mullen called the son of a former Auburn quarterback "a guy that grew up kind of wanting to play for where he's at."

"But I think he's handled it very well," the Gators coach said. "So I think he's got talent. I mean, you see he's already had to play in some big games, big moments, and he's handled that well as a freshman. He can throw, he can run and he's a talent."

"That actually makes me a little more happier, having a guy that wants to sit back there and throw the ball," Davidson said. "That leads to more sacks for me."

On the other side, this Florida game evokes strong memories in the Nix family. His father, Patrick, threw the game-winning touchdown pass to Frank Sanders in the final seconds to lift the Tigers to a win at No. 1 Florida in 1994.

Now his son, who has watched that play "a bunch" of times, returns 25 years later trying to carve out his own memories.

"I knew when I came here that we were going to have games that were similar and flashbacks were going to be brought up," Bo Nix said. "I think it's cool. Auburn, when they play at The Swamp, they play pretty well, and that's for any year they've played at The Swamp. We're just looking forward to playing."