AAC additions: A glance at the conference's six new teams 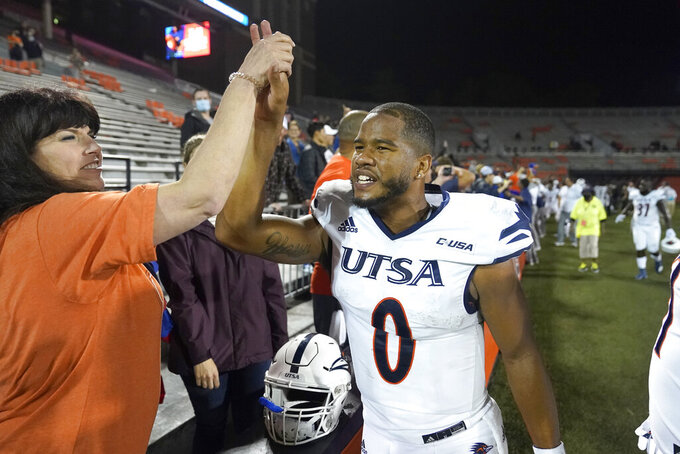 FILE - UTSA quarterback Frank Harris celebrates his team's win over Illinois in an NCAA college football game in Champaign, Ill., in this Saturday, Sept. 4, 2021, file photo. No. 24 UTSA is nationally ranked for the first time as well as 7-0 for the first time and on its first winning streak as long as seven games as the Roadrunners visit Louisiana Tech. (AP Photo/Charles Rex Arbogast, File)

A glance at the American Athletic Conference's six new members:

Current record: 4-2, under coach Will Healy.

Notable: The football program was started in 2008 and became a full fledged member of Division I’s highest level in 2015. The 49ers have had one winning season since.

Notable: Rice is the oldest and most tradition-rich of the AAC’s new football members, but it has had a difficult time sustaining football success in recent years. A former member of the old Southwest Conference with schools such as Texas and Arkansas, the Owls have played in five bowls games since joining Conference USA in 2005.

Notable: UAB's football program has made a remarkable recovery, having been canceled after the 2014 season and then returning after a two-season hiatus. Since restarting, the Blazers have gone to the last three Conference USA championship games under Clark, and won two.

Notable: UTSA's football program was started in 2012 and has had five winning seasons and made two bowl games. The Roadrunners (7-0) are currently undefeated and ranked for the first time in program history at No. 24 in the AP poll under second-year coach Traylor.