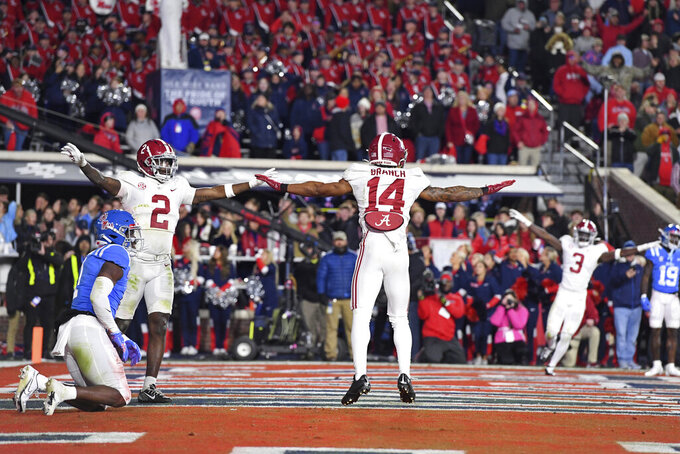 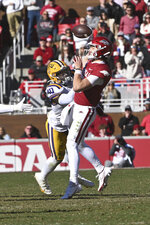 No reason to hedge anymore: Alabama is out of the College Football Playoff race.

The 10th-ranked Crimson Tide beat No. 11 Mississippi, but all that did was clinch the SEC West for No. 7 LSU, which beat Arkansas earlier Saturday to eliminate Alabama.

Without a path to the Southeastern Conference championship game, the slim chance Alabama had to reach the CFP for the eighth time in its nine-year history is now none.

No. 6 Oregon (8-2) also saw its playoff hopes coming crashing down in a frantic and frustrating final four minutes against No. 24 Washington, the first of two Pac-12 upsets Saturday night.

Meanwhile, No. 4 TCU (10-0) stayed unbeaten, with a twist. This time the Horned Frogs did it with defense, smothering No. 18 Texas to clinch a spot in the Big 12 championship game.

As for Alabama (8-2), the only other time the Tide missed the CFP was 2019, when a loaded Tide with Tua Tagovailoa lost to Joe Burrow and an LSU team that went on to win a national title.

The last time Alabama entered the home stretch of a season truly eliminated from the national championship race was 2010.

This edition of the Tide could still find its way into a good bowl game. Maybe the Sugar or Cotton. But Heisman Trophy winner Bryce Young, who threw three touchdown passes against Ole Miss, is going to finish his Alabama career on college football's side stage.

Saban seemed particularly happy with his team after beating the Rebels.

“They have a lot of pride in what the standard of playing (at) Alabama is,” he told reporters.

It's fair to wonder, though, if Young, linebacker Will Anderson Jr. and some of the other Alabama stars will even play in the postseason with the first round of the next NFL draft calling.

Which brings up an interesting point to ponder as the days of the four-team College Football Playoff wane.

With a 12-teamer, Alabama would still be very much in the hunt and college football could look forward to at least one more meaningful postseason for Young and Anderson.

The downside of a 12-teamer, at least for some, is the likes of Alabama, Clemson and Ohio State — both of which missed the CFP last season — would seem to be a shoe-in for the playoff every year, even making it in their “down” seasons.

The week before the Pac-12 was set to have two marquee matchups between four teams ranked in the top 12, three with playoff aspirations, two of the conference's contenders lost at home as double-digit favorites.

For a league that has not had a CFP team since 2016, the implosion felt familiar.

Oregon Coach Dan Lanning will face questions about not just his decision to go on fourth down deep in his own territory with the game tied late, but also for not using a timeout to get banged up quarterback Bo Nix on the field for the pivotal play.

At least the Ducks fell to a ranked Washington team. No. 9 UCLA lost as a 20-point favorite to an Arizona team that had not beaten a ranked team since 2018.

UCLA hosts No. 8 USC and No. 13 Utah goes to Oregon next Saturday, both games having lost some juice.

HAL OF A GAME

LSU freshman Harold Perkins caught the attention of the nation last week when the linebacker helped the Tigers upset Alabama, chasing down Young all over the field.

Against Arkansas on Saturday, Perkins was even better with four sacks and two forced fumbles.

Perkins was a huge recruiting win for Brian Kelly after he took over as LSU's coach last December. The five-star from Texas was expected to be part of Texas A&M's No. 1 class but flipped to the Tigers.

Kelly said after the game that Perkins was sick with the flu and vomiting before kickoff. Kelly said he told Perkins that Michael Jordan played his best game when he was sick, referring to MJ's famous flu game in an NBA Finals.

For a span of about 15 minutes early in the day, Vanderbilt and Connecticut were the talk of college football.

The Commodores snapped a 26-game SEC losing streak, scoring a late touchdown to knock off Kentucky.

Second-year Vanderbilt coach Clark Lea inherited the streak and won a total of five games in his first two seasons. The Commodores (4-6) are taking baby steps under the former Vandy fullback.

The hiring of former UCLA coach Jim Mora Jr. didn't inspire a ton of hope for a turnaround at UConn after four wins in three seasons, but that's exactly what has happened.

To reach six wins and bowl eligibility, UConn (6-5) beat No. 19 Liberty, which just a week ago won at Arkansas.

“This is everything we wanted to bring this program back to,” quarterback Zion Turner said. “Just to have the fans have pride in this program once again, it’s a great feeling.”

One thing to keep in mind: Without a conference affiliation, UConn is not guaranteed a bowl bid.

Texas A&M (3-7) is now one of the most disappointing teams in recent history, going from preseason No. 6 to failing to reach bowl eligibility. Kevin Sumlin, Jimbo Fisher's predecessor, never failed to go to a bowl in six seasons as Aggies coach. ... A&M's sixth straight loss gave Carnell Williams his first win as interim Auburn coach ... Do not write the Atlantic Coast Conference out of the playoff race. The title game is set with No. 12 Clemson (9-1) and No. 15 North Carolina (9-1) to meet in Charlotte. If either wins out, especially Clemson, they got a shot to make up some ground. ... The de facto ACC champ: No. 20 Notre Dame, which has beaten both the Tigers and Tar Heels. ... Is West Virginia's first victory against Oklahoma since the Mountaineers (4-6) joined the Big 12 enough for coach Neal Brown to keep his job in Morgantown? WVU finishes the season with No. 23 Kansas State, which dominated Baylor on Saturday night, and at Oklahoma State. ... A ghastly season for Virginia and first-year coach Tony Elliott found a new low when the Cavaliers' Brennan Armstrong threw Pick-6s on the first two plays from scrimmage against Pittsburgh. It didn't get much better from there. Armstrong was one of the most productive quarterbacks in the country over the last two seasons, but this season has been a disaster. He could be a candidate to take his extra COVID-19 year of eligibility and try again at a new school in 2023. ... Another hyped ACC quarterback who has had a lost season is Miami's Tyler Van Dyke. The Hurricanes turned to freshman Jacurri Brown to beat Georgia Tech. Van Dyke would seem to be a prime candidate to jump into the portal and try to recapture his 2021 form with another school. ... No. 21 Illinois' second straight home loss, this time to Purdue, has thrown open the door to the Big Ten West title to its rivals. The Illini are at No. 3 Michigan next week. Saturday ended with Illinois, Purdue, Minnesota and Iowa all tied for first at 4-3 after the Hawkeyes beat Wisconsin with 146 yards of offense. If you dig into the schedules and tiebreaker possibilities, Iowa is probably the favorite to get to Indianapolis with two weeks left. ... No. 22 UCF is pointed toward a return to the New Year's Six. The Knights beat No. 16 Tulane and are looking good to host the American Athletic Conference championship with games remaining against Navy and USF. UCF likely will face the winner of the regular-season finale between Cincinnati and Tulane.