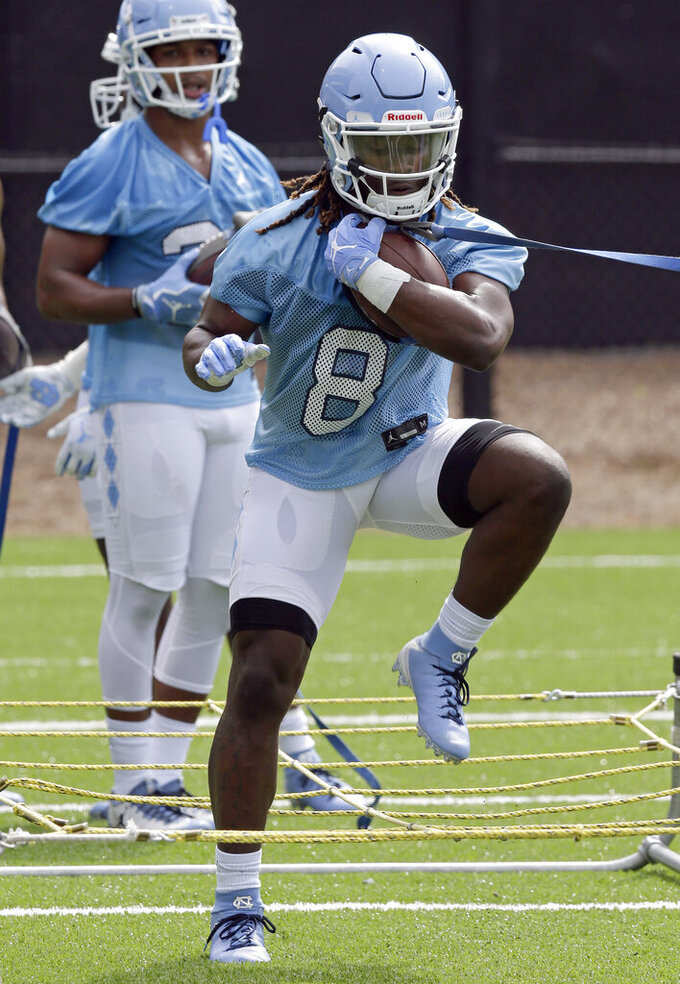 Amid all the uncertainty, there is one area of stability for the Tar Heels: Running back. There is plenty of experience and talent at running back to lean on as the Tar Heels sort things out under center at the start of preseason camp.

The Tar Heels have their top two rushers back in junior Michael Carter and senior Antonio Williams, while sophomore Javonte Williams performed well in late-season work as the lead back.

"In the spring, the running backs were our best (position group)," Brown said Friday after the team's first preseason practice. "And it really wasn't close.

"All three of those guys are good. (Running backs coach Robert Gillespie) and I talked this morning about how do we rotate them and all that. I said: 'Let them play, they're all going to play, we'll figure that out when we get closer to game time.'"

Brown is back for a second stint in Chapel Hill, a 67-year-old Hall of Fame coach who built the Tar Heels into a top-10 program more than two decades ago before his long run at Texas. He is charged with recreating at least some of that success here as he returns to college coaching for the first time since the 2013 season.

He won't have a proven quarterback to rely on, though. The Tar Heels have a three-way battle to run Phil Longo's "Air Raid" offense between two redshirt freshmen (Cade Fortin and Jace Ruder) and a true freshman (Sam Howell).

Brown said earlier this week that the team has no timeline for naming a starter for the Aug. 31 opener against South Carolina in Charlotte, saying: "We're just going to let it work itself out."

At the same time, Brown has said the "Air Raid" description might be "overused" because he wants the Tar Heels to have a power running component to go with the ability to throw the ball downfield. And that's where the trio of returning backs come in.

Carter ran for 597 yards and averaged 7.1 yards per carry, including big totals against Virginia Tech (165 yards) and Duke (148). Antonio Williams ran for 504 yards and had 100-yard outings in UNC's lone Atlantic Coast Conference win (114 yards against Pittsburgh) and on the road against a 10-win Syracuse team (116).

As for Javonte Williams, he ran for 83 yards and a touchdown as the lead back in the season finale against rival North Carolina State.

The three combined to average nearly 6.1 yards per carry in just about the only reliable efficiency in a fast-paced offense that sputtered at the close of Larry Fedora's seven-year tenure.

Carter said there were a lot of similarities in what the running backs will be asked to do this fall. Brown and the Tar Heels hope that leads to even bigger performances, and maybe buy time for whoever becomes the starting QB to settle into the job.

"That's going to be very beneficial for the quarterbacks because we know what we're looking at as running backs," Antonio Williams said. "We know fronts, so we can tell you if a safety's rolling and if maybe a blitz is coming and stuff like that. So we can help (the quarterbacks) get a little bit off their plate before the snap and allow them to think about just what they've got to do."