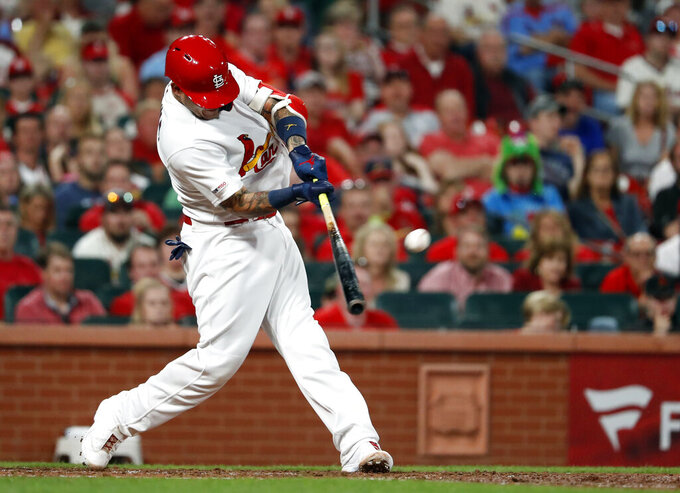 St. Louis Cardinals' Yadier Molina hits a two-run home run during the fourth inning of a baseball game against the Philadelphia Phillies, Monday, May 6, 2019, in St. Louis. (AP Photo/Jeff Roberson)

"The guy is a real ballplayer," Mikolas said. "Flat-out does everything. It's no surprise."

The right-hander pitched seven stellar innings and Molina hit one of three home runs that powered St. Louis past the Philadelphia Phillies 6-0 on Monday night.

Mikolas (4-2) allowed only three hits in his second-longest outing this year. He struck out a season-high five and did not issue a walk.

"This is pretty indicative, for sure," St. Louis manager Mike Shildt said. "This is Miles and who he is and what we expect. A quality job across the board. He controlled counts. He was just in control."

Mikolas did not lobby to stay in the game.

"I felt like I had a little left in the tank," he said. "You don't want to burn out your tires this early in the season."

Molina thought location was the key for Mikolas.

"His curveball was good," Molina explained. "His fastball, his location. He pitched a really good game. We located the fastball really good and when you do that, everything else is going to work."

John Brebbia and Jordan Hicks finished the five-hitter. It was the second shutout this season for St. Louis.

Molina added two singles for a three-hit game. In his last 16 games at home, he has three homers and 18 RBIs. He has hit safely in 14 of those games, batting .349 during that span.

"Good swings every time out," Molina said. "I just want to put the ball in play hard."

The Cardinals chased starter Vince Velasquez (1-2) in the fifth when he gave up two homers sandwiched around a single. He allowed five runs on four hits and five walks.

Molina got the first St. Louis hit when he belted a 2-2 pitch into the left field seats in the fourth inning. He drove in Jose Martinez, who drew his second walk from Velasquez. Molina's third home run of the season extended his hitting streak to 12 games.

St. Louis put together a big inning in the fifth, sending nine batters to the plate. Carpenter led off with a homer and, after Paul Goldschmidt singled, DeJong hit his seventh home run of the season.

Phillies reliever Edgar Garcia, making his big league debut, got an out but then gave up singles to Martinez and Molina. A wild pitch advanced both before Kolten Wong's sacrifice fly accounted for the fourth run of the inning and a 6-0 lead.

The Cardinals improved to 13-4 at Busch Stadium, the best home record in the National League and second in the majors. Houston is 10-3 at home.

Philadelphia recalled Garcia from Triple-A Lehigh Valley and optioned RHP Enyel De Los Santos to its top farm club. "Got a fairly heavy right-handed-hitting lineup for the Cardinals and I think it'd be valuable to have him for the series," Kapler said about Garcia.

Phillies: INF Scott Kingery (right hamstring) took grounders before the game at shortstop. "Ground balls were not full speed, just a little to his left and right," Kapler said. "Some tag plays at second, but a good step in the right direction."

Cardinals: RHP Carlos Martinez (shoulder) pitched Sunday in the fifth inning for Class A Peoria and retired three batters on six pitches, getting three groundouts. "I'll take three outs on six pitches every day, regardless," Shildt said. "It was great for Carlos. We're happy for him. He's back here. He'll play catch and then he'll go to (Triple-A) Memphis and get an opportunity in the next couple days to throw again and we'll just continue to evaluate where we are with him."

Cardinals: RHP Dakota Hudson (2-2, 4.80) will be making his first regular-season appearance against the Phillies. He had a career-high seven strikeouts and went six innings for the first time in his last start, a 2-1 loss at Washington.