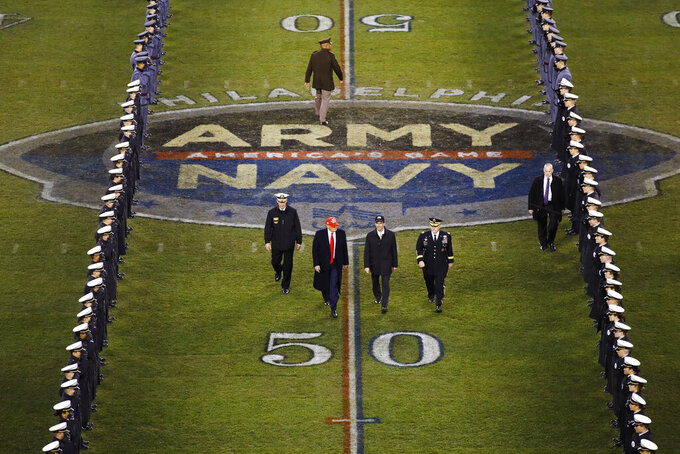 FILE - President Donald Trump and Secretary of Defense Mark Esper cross the field after the first half of an NCAA college football game between Army and Navy in Philadelphia, in this Saturday, Dec. 14, 2019, in file photo. Bump Army-Navy or go head-to-head with NFL? That's the choice facing those in charge with expanding the College Football Playoff if they want to take the format from four to 12 teams. (AP Photo/Matt Rourke, File)

If a 12-team format is the future of the College Football Playoff —- and odds are that it still is despite a recent detour on the road to expansion — among the many details that need to be worked out is when it would start.

There are two choices that will be considered by the administrators who make up the CFP management committee:

— Hold the first round the second weekend of December, which would create what some members of the committee believe is an unfair advantage for playoff teams that don't play conference championship games while also bumping into what has become the traditional standalone date for the Army-Navy game.

— Play the third week of December and deal with the possibility of scheduling the playoff around or against NFL games.

“That’s part of what we’re trying to figure out, just the sequencing of when these games would be played and in what order," Atlantic Coast Conference Commissioner Jim Phillips told AP this week, adding that the safety of teams playing two high-stakes games in a row was a factor." So we have to pay careful attention to that, not only the number of games, but how they are sequenced."

Instead of moving forward on a 12-team model as many involved hoped would be the case by now, the committee is sorting through the pros and cons of an eight-team format.

With eight teams, there are no games that need to be played in mid-December, eliminating altogether those issues as well as conflicts with final exams at many schools, and making that number more appealing to some committee members.

Still, there are obstacles to eight that make expansion to 12 more likely .

Getting consensus on when to play those first four games in a 12-team model is an important piece of the playoff puzzle. How quickly it is in place will help determine if the playoff expands sooner or later.

The 12-team plan calls for the first four games to match seeds 5-12 on campus sites. The top four teams, all conference champions under the proposal, would have byes into the quarterfinals to be played on or near New Year's Day.

Using previous final CFP rankings as an imperfect guide to how a 12-team playoff might have played out in the recent seasons, AP looked at the 2017-19 seasons. (Previous seasons were not used because the Big 12 was not playing a conference title game and 2020 was thrown out because the pandemic caused several conferences to have abbreviated seasons.)

In those three seasons, there would have been a total of five matchups between a team that played in a conference championship game and one that did not.

None of those hypothetical matchups involved Notre Dame, but the Fighting Irish are clearly on the minds of some members of the committee. Notre Dame athletic director Jack Swarbrick was part of the subcommittee that drew up the 12-team plan.

Under the proposal, independent Notre Dame would never get a first-round bye. Swarbrick has said that was a fair trade-off for Notre Dame never having to play on championship weekend. The Irish would always have a week off while most playoff contenders are playing.

But it's not just Notre Dame. Using 2017-19 final CFP rankings, 11 teams that did not qualify for their conference championship would have made a 12-team field during those three seasons.

Then there is the Army-Navy problem. The rivalry has been the only game scheduled to be played on the second Saturday of December since 2009, and those involved would like to keep it that way.

“It's been huge,” Navy athletic director Chet Gladchuk said. “It's helped us on every front in terms of corporate sponsorship, television exposure, ratings, national exposure with regard to a fanbase for both Army and Navy that is national not parochial.”

Moving Army-Navy back a week would then place it during what is now the first weekend of bowl season. It would also complicate matters if either is in position to qualify for the playoff.

Gladchuk was hesitant to speculate with so much uncertainty, but said maybe Army-Navy could moved to Thanksgiving weekend if a 12-team playoff took over mid-December.

Having the playoff on this weekend probably means a whole bunch of lower-tier bowl games would need to find another date.

The bigger potential obstacle is late-season NFL games. The league typically plays games on the final two Saturdays of December.

This year, because of the way the calendar breaks, there are no Saturday NFL games on the third weekend of December. But last year, there was.

It's one thing for ESPN to string together a handful of minor bowls to go up against the mighty NFL. It's quite another to ask a television partner to pay hundreds of million of dollars for a new CFP and then expect that network to put that up against the TV ratings monster that is the NFL.

A solution could be simply not playing some or all of those first four games on Saturday, instead making them primetime weeknight games.

Something to keep in mind that could make going against the NFL not seem so scary. With the NFL's Thursday night package moving to Amazon in 2022, the late-season Saturday games are likely to be exclusive to the NFL Network. ESPN and/or Fox (if it gets into the CFP business) would have room for those college games.

Gladchuk is not involved in the CFP process, but he said putting an open week between championship weekend and the start of the playoff made sense.

“They would give (the players) a week off to regroup," he said. “They'd give the fans a chance to recalibrate and make destination plans.”

CFP Executive Director Bill Hancock said last month if a new format is to be implemented for the 2024 season, consensus needs to be reached by the management committee by late December or January. Otherwise, the 2026 season would be the soonest a change could be made.

No official meetings have been announced, but November could be a pivotal month to work things out. When to start the playoff is not the biggest hurdle, but it's another tricky one on a long list.