Collins eager for restart at Georgia Tech after 3-win finish 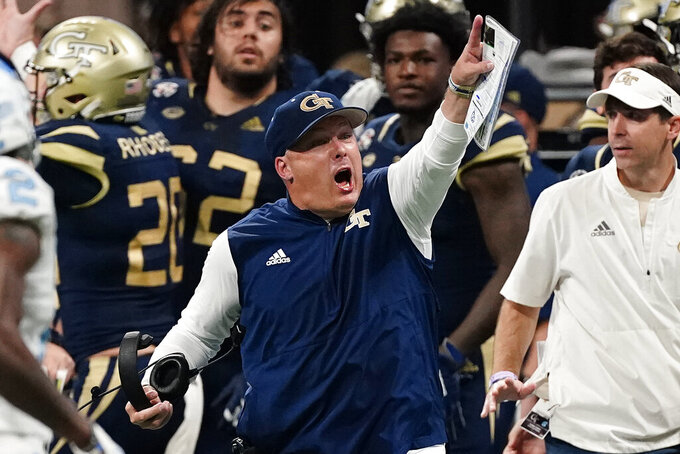 Following his third consecutive three-win season and heavy losses through the transfer portal, including the exit of standout running back Jahmyr Gibbs, Collins and the Yellow Jackets need to shift the focus to the future as quickly as possible. Georgia Tech opened spring practice on Thursday, earlier than most programs.

Collins joked he was so eager to start practice he didn't have to change clothes.

“The outfit you see right now is the outfit I slept in last night,” he said with a laugh.

Gibbs, who has moved to Alabama, announced his decision to transfer only two days after a 3-9 finish to the 2021 season. The ugly season ended with six consecutive losses, capped by blowouts against Notre Dame and eventual national champion Georgia by a combined 100-0 margin.

Gibbs was the first of 12 players to leave the Yellow Jackets through the transfer portal. Among other significant departures were defensive end Jordan Domineck, the team's top pass rusher, running back Jamious Griffin, and starting safety Wesley Walker.

Collins, 9-25 through three seasons at Georgia Tech, said he doesn't see the heavy losses through transfers as a collective vote of no-confidence in his program.

“I do not,” Collins said. “I just take it as we love those guys, we care about those guys. If they feel there’s another situation that they need, we counsel those guys, we have conversations with them. But then you have to look to the guys who are on your roster, on your team and your program that you’re blessed every single day you get to coach and focus on that and keep it moving.”

Gibbs was the Yellow Jackets’ leading rusher and third-leading receiver. Jordan Mason, the second-leading rusher last season, turned pro instead of returning for his extra year of eligibility provided by the NCAA due to the coronavirus pandemic.

Hall is one of seven players to join the program as transfers. Former Akron quarterback Zach Gibson could be Sims' top backup. Jordan Yates was the top backup last season before entering the transfer portal.

Collins said he and his new staff “did a whole evaluation of everything we do in the organization since December."

"We’ve made tweaks, we’ve made improvements,” he said.