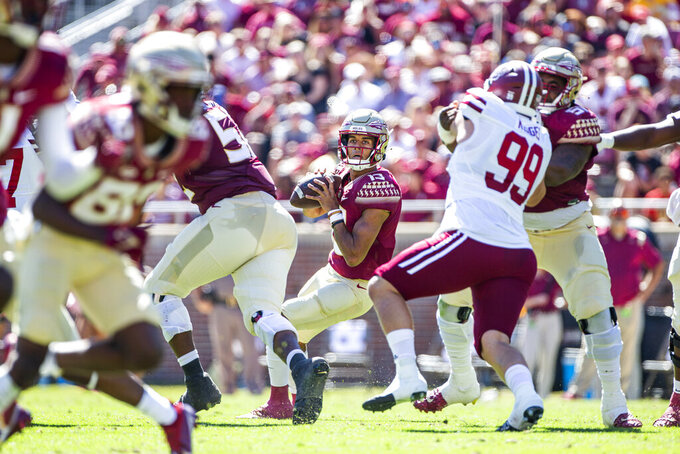 TALLAHASSEE, Fla. (AP) — Florida State has rarely been in this position — building a big lead against an FBS opponent and going deep into the bench in the fourth quarter with a game well in hand.

“Today we did what we needed to do — we went out and we were dominant in a football game,” Florida State coach Mike Norvell said. “It’s been a while since we’ve been able to showcase that identity that we’re capable of, even when people expect you to do that. Can you still show up and go get the job done?”

Florida State got the job done, wasting little time putting away UMass. The Seminoles scored on eight of their 10 drives and matched a season high in points for a game this season with 38 in the first half alone.

What was a tumultuous September has seen a bounce back in October with wins over Syracuse, North Carolina and UMass. The Seminoles (3-4) have won three straight games for the first time since the end of the 2017 season.

Corbin ran for 127 yards on 11 carries, his fourth 100-yard rushing game this season. Travis ran for 78 yards on nine carries despite playing just a drive after halftime.

Florida State ran for a season-high 365 yards, the sixth time this season the Seminoles have surpassed the 200-yard mark on the ground.

With mostly backups in the game, redshirt freshman quarterback Chubba Purdy completed touchdown passes to Camren McDonald in the third quarter and Jordan Young in the fourth quarter. Florida State’s starters erupted in celebration on the sideline.

“It just shows what type of team we’re becoming,” Travis said. “We’re brothers. Last year you would not see that at all. Guys like seeing other guys making plays. And that’s what so special. It’s a team game and we’re a team for once. It feels like a team this year. It’s a bunch of guys that love each other. It’s really special.”

The Seminoles also grabbed two interceptions. Jarvis Brownlee had a 70-yard interception return for a touchdown, and Jammie Robinson had an interception in the end zone.

Cameron Carson made a 45-yard field-goal attempt for UMass (1-6) after Florida State fumbled the game-opening kickoff.

Ellis Merriweather was held to 1 rushing yard on 10 carries but had four receptions for 65 yards for UMass.

Florida State ran for 365 yards, the most since a 478-yard outburst at South Florida in 2016. It's just the fifth time Florida State has run for at least 365 yards since 2000. The Seminoles have six 200-yard rushing games, the first time they have done that in their first seven games of a season since 1995.

Florida State is the first team in the 69-year history of the ACC to start 0-4 and win its next three games.

Florida State won its ninth straight homecoming game and scored its most points against an FBS opponent since the Seminoles knocked off Texas State 59-16 in Sept. 2015.

UMass plays at Liberty on Saturday.

FSU goes to Clemson next Saturday.