Georgia QB Bennett announces he will return for 1 more year 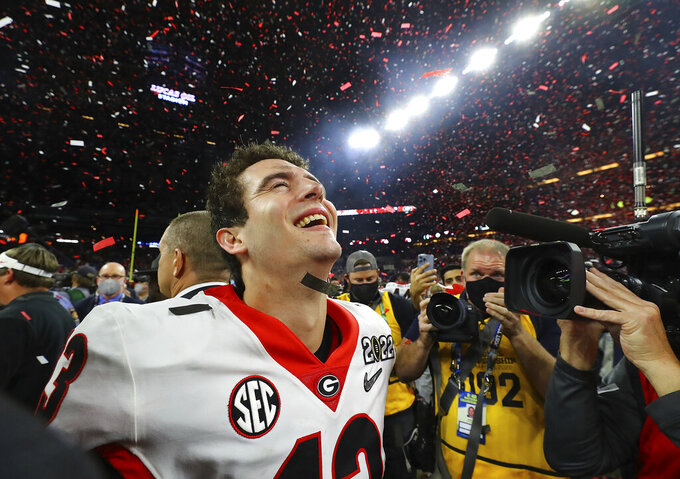 ATHENS, Ga. (AP) — Georgia quarterback Stetson Bennett is returning for another season after leading the Bulldogs to their first national championship in 41 years.

Bennett, who carried a flip phone and avoided social media during the 2021 season, made an exception to his policy by posting the words “One More Year” on his Instagram account on Wednesday.

Bennett began his Georgia career as a walk-on. He then transferred to a Mississippi junior college before returning to the Bulldogs. As a senior in 2021, Bennett replaced JT Daniels as the starter and then kept the job.

Bennett will take advantage of the NCAA's “Super Senior” rule to use the added year of eligibility granted in 2020 because of the pandemic.

Daniels, who transferred to Georgia from Southern Cal, has again entered the transfer portal as he seeks a new school for his final year of eligibility.

Bennett led Georgia to a 33-18 win over Alabama on Jan. 10 for its first national championship since 1980.

The 5-foot-11 Bennett overcame skeptics to rank fourth in the NCAA in passing efficiency (179.69). Even so, he likely would have faced long odds in attracting interest in this year's NFL draft. He has said he plans to enter law school.