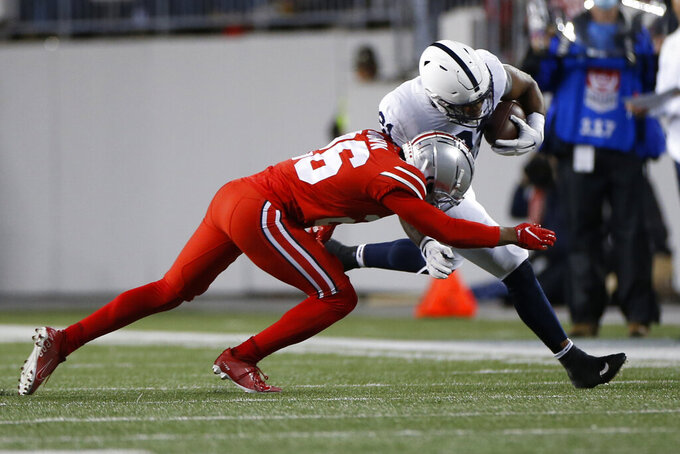 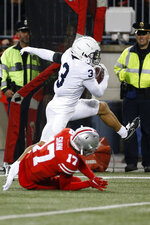 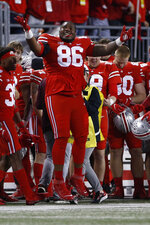 COLUMBUS, Ohio (AP) — Facing adversity for the first time in more than a month, Ohio State showed off the mettle the Buckeyes believe they'll need to get through the rest of a rugged Big Ten schedule.

TreVeyon Henderson ran for 152 yards on a season-high 28 carries and No. 5 Ohio State made just enough long plays and short field goals to hold off No. 20 Penn State 33-24 on Saturday night.

"We weren't trying to get style points against Penn State," Ohio State coach Ryan Day said. “That's not how it works.”

Coming off an ugly nine-overtime loss at home to Illinois, Penn State looked more like the team that had climbed into the top five before losing to Iowa in a game where quarterback Sean Clifford was injured.

“I thought we were more physical, broke some tackles, made some people miss things like that,” Penn State coach James Franklin said. “We’ve got to continue to build on it.”

Clifford looked healthy and sharp, going 35 for 52 for 361 yards and a touchdown after a tentative performance last week. Still, the Nittany Lions lost their third straight to fall out of contention in the Big Ten East.

“I feel like I could have done so much more to change the outcome,” said Clifford, an Ohio native.

Ohio State had hardly been tested since losing to Oregon in Week 2. Against Penn State, the Buckeyes played a lot like they did against the Ducks: struggling to finish drives and get off the field on third down.

The Buckeyes are tied for first in the East Division with unbeaten Michigan State, which defeated No. 6 Michigan in a thriller earlier Saturday. Ohio State finishes the season with consecutive games against the Spartans and Wolverines.

The highest-scoring team in the country was held out of the end zone for the first 26 minutes before two explosive plays in the span of about 1:24 gave Ohio State the lead.

Penn State responded by moving quickly into Ohio State territory, but Clifford was sandwiched by ends Tyreke Smith and Zach Harrison and the ball came loose. Jerron Cage scooped it up and sprinted untouched 57 yards for a touchdown to make it 17-7.

Harrison's reaction when he saw Cage cruising toward the end zone? “What? Is he running for the score?”

"He was carrying it like a loaf of bread," Day said.

The 305-pound Cage was feted by teammates on the sideline with water and waving hands and towels to cool him off as he caught his breath.

Penn State tied it at 17 in the third quarter on a 2-yard TD run on direct snap to star receiver Jahan Dotson.

Henderson, after a false start on the goal line that forced Ohio State to settle for a field goal on its previous possession, ripped off a 68-yard run to setup a 1-yard scoring plunge by the fabulous freshman. That made it 27-17 with 3:35 left in the third.

Penn State came right back with another long TD drive, finished off with Keyvone Lee's 1-yard run to make it 27-24 heading into the fourth quarter.

Cam Brown's interception in Penn State territory set up a 25-yard field goal by Ruggles to make it 30-24 with 4:03 left.

“These type of games are definitely needed when you go into this Big Ten play, especially this year, a lot of Big Ten teams are great,” Stroud said.

Penn State: The Nittany Lions were almost unrecognizable from last week's performance against Illinois when they could not stop a one-dimensional team from running all over them and could neither sustain drives nor convert a 2-point play on six of seven attempts.

Ohio State: A month of pummeling overmatched opponents had the Buckeyes looking as if they might be emerging as the clear favorites in the Big Ten East after some early struggles, especially on defense. The conference still runs through Columbus, but Ohio State appears vulnerable against teams with more comparable talent.

Penn State is in danger of being unranked for the first time this season while Ohio State is probably holding steady at best when the AP poll comes out Sunday.

Penn State: The Nittany Lions look to snap their skid at Maryland.

Ohio State: The Buckeyes go to Nebraska next week.