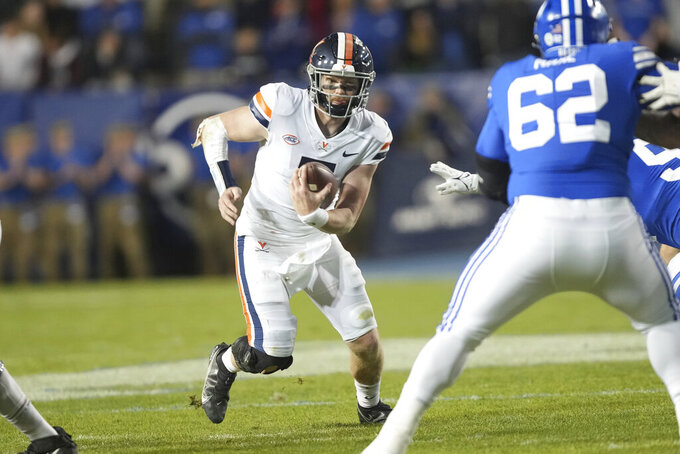 The Hokies (5-6, 3-4 Atlantic Coast Conference) play at Virginia on Saturday and need a victory to become bowl eligible. That's just one of the many reasons the game takes on great importance, the former Hokies player said.

“We still have a chance to extend our season and we understand that coincides with a victory,” Price said this week. his second as coach after the school and Justin Fuente parted last week and Price was named the interim coach.

The Cavaliers (6-5, 4-3) have been bowl eligible since an Oct. 23 victory against Georgia Tech, but will come into the game having lost three in a row, all against ranked teams. They've also beaten the Hokies just once in the last 17 meetings.

Their most recent loss, 48-38 at Pittsburgh a week ago, was a must-win if they hoped to be Coastal Division champions, but coach Bronco Mendenhall said having the Hokies up next will make refocusing easier.

“When you invest as much as our program has to win the Coastal Division, the thought that now, okay, you just move on, yeah, that’s not realistic,” he said this week. “But knowing here comes the next really meaningful game that has just so much meaning to our program, certainly it will help.”

Some other things to watch for when Virginia Tech visits Virginia:

The Hokies used both Braxton Burmeister and Connor Blumrick in their 38-26 loss at Miami in Price's first game, with Blumrick getting more playing time than he has all season, and producing. He threw two touchdown passes to rally the Hokies from a 31-13 third-quarter deficit and ran for 132 yards.

The difference in Virginia's offense with Brennan Armstrong at quarterback and with someone else back there has been highlighted in the past two weeks. Against No. 7 Notre Dame, with Armstrong sidelined and freshman Jay Woolfolk at the controls, they gained 278 yards in a 28-3 loss. Last week at Pitt, Armstrong threw for 487 yards and the team gained 518.

The Cavaliers hurt their chances greatly at Pittsburgh by allowing a kickoff return touchdown, a punt return into their own territory and with numerous untimely penalties to keep Panthers drives alive. Those plays can both give momentum to the team pulling them off, or killing it for the team on defense.

The game will be the last at Scott Stadium for a number of seniors, including several that took advantage of the opportunity to stay another year after the NCAA made the 2020 season not count against eligibility. Emotions will also run high for the Hokies, though; Price is an emotionally charged former player.

Virginia's attendance has been gradually improving with the Cavaliers' success on the field, but the absence of anything close to a sellout always allows for thousands of Hokies fans to attend. If Virginia Tech starts fast, that presence can make the home team feel like it's swimming upstream in its own stadium.