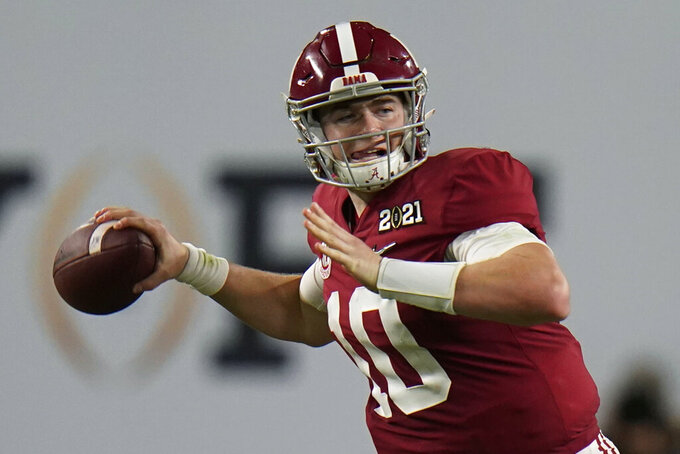 DeVonta Smith was there for quarterback Mac Jones once again, this time it was at Alabama's latest pro day.

The Heisman Trophy-winning wide receiver seemed to have little left to prove for NFL teams on the field, but showed up Tuesday to help Jones out. Jones threw a series of different routes, including some deep balls, to players like favored targets Smith and tailback Najee Harris in his second outing before NFL personnel that included several head coaches and general managers.

Smith was a late addition to the target list, though he's already regarded as a likely Top 10 pick.

“He didn't have to do that,” Jones told the SEC Network, which aired the pro day. “You watch the tape and he's great. But he called me this morning (Tuesday) and was like, ‘Dude, I got you. Let’s just get a couple of routes in.'”

Jones showcased his arm strength a week after participating in the Crimson Tide's first pro day. He had a scripted series of some 60 throws, about a quarter of them deep ones.

Jones said he had different plans prepared in case Smith and/or Jaylen Waddle participated, or if neither of them did. Waddle, also one of the top receiving prospects, didn't work out at the pro day.

Smith had earlier indicated that he didn't plan to, either.

Jones and Smith connected on several deep balls, continuing the smooth connection they displayed in the regular season.

Smith said he wanted to show a finger he injured in the national championship game was healed. It kept him from playing or practicing at the Senior Bowl. At pro day, he said, “The competitiveness came out in me.”

So did the loyalty.

Belichick was among a group of five general managers on hand, joined by the 49ers John Lynch, the Saints’ Mickey Loomis, the New York Jets' Joe Douglas and the Bears' Ryan Pace.

Harris displayed the hands that helped him catch 43 passes as a senior before doing individual running back drills. He won the Doak Walker Award given to the nation's top running back, and joined Smith and Jones among the top 5 in the Heisman race.

All four are projected as first-rounders in a draft when Alabama could have as many as six, including center cornerback Patrick Surtain Jr. and defensive lineman Christian Barmore.

Most of Tuesday's session featured Jones launching passes with an array of routes, including a number of deep balls, to teammates like Harris, Smith and tight end Miller Forristall.

He finished up by catching a short pass in the end zone from Harris.

Jones also wanted to show he could make throws on the move, including a couple of off-balance, across-the-body passes.

“At Alabama, they told me to sit in the picket and rip it, so that's what I did,” Jones said. "That's what you're supposed to do when you're at Alabama.

“But when the NFL comes, I'll do whatever they tell me to do. I showed today that I can do everything that they want me to do."