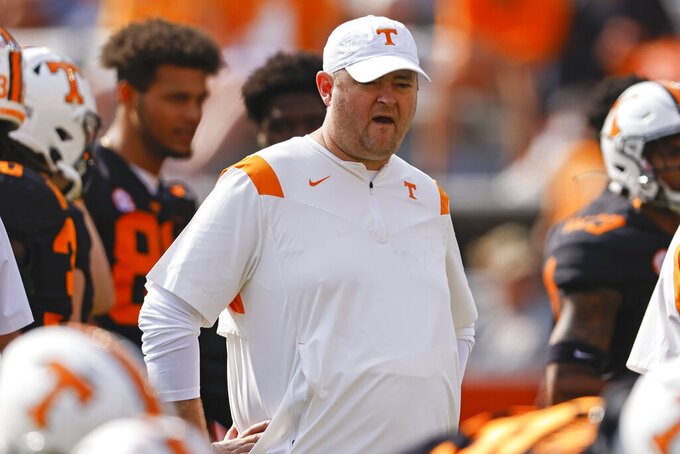 KNOXVILLE, Tenn. (AP) — Tennessee is throwing quite a party for Lane Kiffin's first game back in Knoxville as a head coach.

“Obviously that means there’s a lot of energy and excitement around there,” Kiffin said.

Ole Miss (4-1, 1-1) also leads the Southeastern Conference in total offense with 561.6 yards a game with the Volunteers are third with 474 yards.

Kiffin has been impressed by what the Vols (4-2, 2-1) have done in coach Josh Heupel's first season, especially coming off two straight wins including a 45-20 rout of South Carolina.

His Rebels held off Arkansas 52-51. Tennessee is starting to deliver the fast-paced football Heupel promised when hired. Now he has his first packed stadium, Heupel wants them to do their part.

Kiffin knows the perception of what Ole Miss and Tennessee run on offense probably doesn’t meet reality. They run the ball well, not just pass it around all the time. The Rebels are fifth nationally in rush offense, averaging 259.6 yards. Tennessee is seventh, producing 253.7 on average on the ground.

“I like to live in reality, not perception,” Kiffin said. “The point is the second week in a row we’re getting ready to play a great rushing team and the facts show you that, even though a lot of people say, ‘Oh, here’s another spread team that throws the ball all over.’ That ain’t the case.”

Ole Miss hopes to get back running back Jerrion Ealy, who missed the Arkansas game under the concussion protocol.

The Vols already have scored 249 points, eclipsing the 215 scored in 10 games last season. They also have put together back-to-back games where they scored 28 points in the first quarter and 107 points alone in the past two games.

Heupel is the first Tennessee coach to have his team score more than 40 points in three of his first six games.

Hendon Hooker comes in 3 -1 as Tennessee's starting quarterback. The graduate transfer from Virginia Tech is averaging 224.2 yards per game, and Hooker has thrown 13 touchdowns with only one interception.

When defensive back Theo Jackson, Tennessee’s leading tackler, missed the South Carolina game with an injury, Brandon Turnage got the call. After spending his first two seasons at Alabama, the transfer responded with 14 tackles and two tackles for loss to earn SEC Defensive Player of the Week.

Another Tennessee transfer, Juwan Mitchell, appeared in three games before his season was cut short by a shoulder injury. Mitchell, a senior linebacker, was Texas' leading tackler last season and had eight tackles this season before being sidelined.