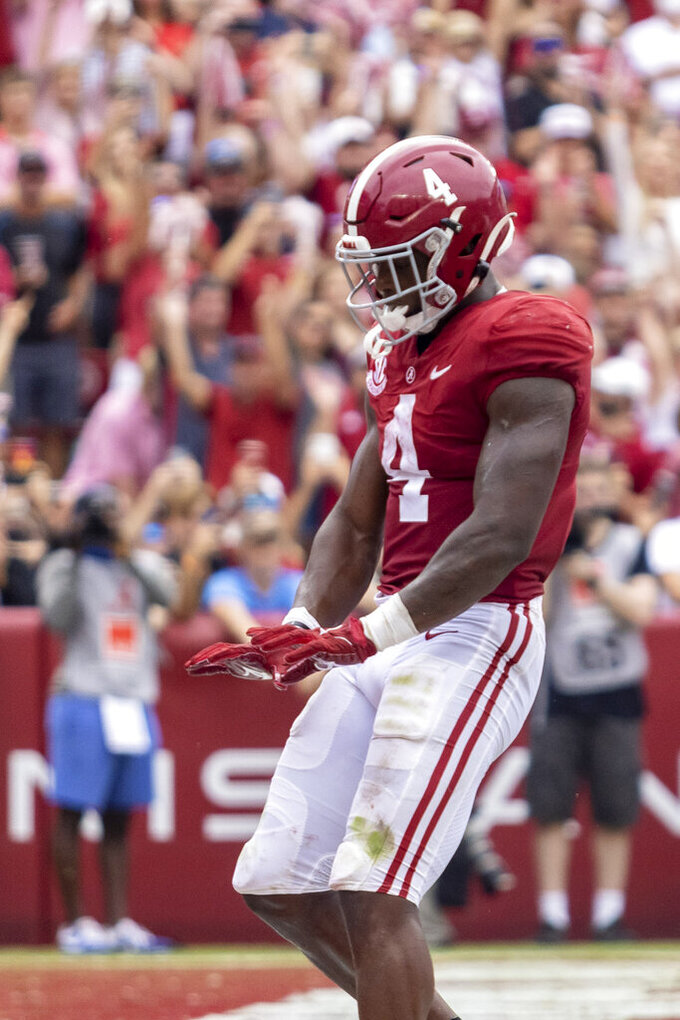 Alabama running back Brian Robinson Jr. (4) celebrates his touchdown run during the first half of an NCAA college football game against Mississippi, Saturday, Oct. 2, 2021, in Tuscaloosa, Ala. (AP Photo/Vasha Hunt)

Brian Robinson Jr. returned for a fifth season at top-ranked Alabama ready for a bigger role as the primary rusher.

The senior running back is not only handling the added responsibilities with the same explosiveness as his standout predecessors, but showing durability that is impressing NFL scouts.

But after patiently playing behind the latter two, Robinson is building his own profile.

Robinson rushed 36 times for 171 yards and four short touchdowns — all career highs — in Alabama’s 42-21 victory over then-No. 12 Mississippi. That’s 22 carries more than his previous best and demonstrated his ability to handle a heavier workload as the game unfolded.

“Being where I am, I’m grateful for the opportunity,” said Robinson, who has 73 carries for 379 yards and six touchdowns this season. “It just feels better that I’ve been patient enough to wait it out.”

Whether Robinson’s number is called as often in Saturday night’s SEC game at Texas A&M remains to be seen, but the potential was always there.

“He’s played well for us in the past,” Alabama coach Nick Saban said. “He just hasn’t got as many opportunities. ... But, not surprised. He’s a very good player and certainly had a very good game.”

Like many Alabama backs, Robinson is a 6-foot-1, 225-pound wrecking ball inclined to run over or through defenders rather than hurdle them. He rushed for 1,361 yards and 15 touchdowns his first four seasons before coming back this fall with the extra year of eligibility. He ranks seventh in Southeastern Conference rushing but is tied for first in TDs and fourth in attempts.

Robinson might find it hard to top last week’s ironman performance against Ole Miss. Punishing runs up the middle set up those scores and first 100-yard game that led ‘Bama’s old-school, 210-yard effort. Not a bad way to bounce back after missing the previous game with a rib injury.

“He’s a big, powerful dude,” said Nagy, whose organization honored Robinson as player of the week. “He squares his pads and he runs hard. He’s exactly what the NFL wants. There’s been a long line of them now where those guys get to the next level and produce. Brian is the next one.”

Pro Football Focus last summer had Robinson listed among players to watch as one of the few seniors in a running backs group full of underclassmen. His career day highlighted his strength and stamina, and more games like that could boost initial projections from the middle to early rounds.