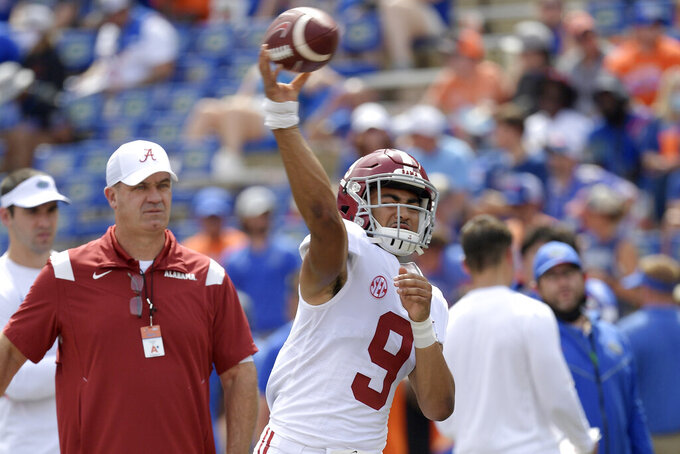 FILE - Alabama quarterback Bryce Young (9) warms up as offensive coordinator Bill O'Brien, left, watches before an NCAA college football game against Florida, on Sept. 18, 2021, in Gainesville, Fla. Young views the Heisman Trophy as about what he and Alabama have already done, not what the top-ranked Crimson Tide are still trying to accomplish in his first season as their starting quarterback. (AP Photo/Phelan M. Ebenhack, File)

Line: Alabama by 13½, according to FanDuel Sportsbook.

The winner moves on to the national championship game. Cincinnati, the nation’s only undefeated team, is the first non-Power Five conference team to make the CFP. Defending champ Alabama is in its seventh semifinal game in the eight seasons of the four-team format. The Crimson Tide have won their last five semifinal games, with three national titles in that span.

Cincinnati All-American CB Ahmad “Sauce” Gardner vs. Alabama All-American WR Jameson Williams. Gardner has developed from a scrawny, 160-pound freshman into one of the nation's most feared defensive backs who has never given up a touchdown in coverage. Williams, a transfer from Ohio State, has 68 catches and leads the SEC with 1,445 yards receiving (21.2 yards per catch) and 15 TDs. He has 11 catches of at least 50 yards, including TDs of 67 and 50 yards in the SEC title game.

Cincinnati: RB Jerome Ford, the former transfer from Alabama who in his second season with the Bearcats has run for 1,242 yard and 19 TDs. 'Bama has allowed only 82.8 yards rushing per game.

Alabama: Bryce Young, the first Alabama QB to win the Heisman Trophy and trying to become the school’s fifth first-year starter since 2009 to win a national title, has 4,322 yards passing. He has completed 314 of 462 passes (68%) with 43 TDs and only four interceptions.

Alabama is 5-0 in games played at AT&T Stadium, the home of the NFL’s Dallas Cowboys. That includes two CFP semifinal games, 38-0 over Michigan State in the Cotton Bowl six years ago, and 31-14 over Notre Dame last New Year’s Day in a Rose Bowl relocated from Pasadena because of COVID-19 restrictions in California. … Alabama sophomore LB Will Anderson leads the nation with 15 ½ sacks and 32 ½ tackles for the loss. … Cincinnati coach Luke Fickell was the Ohio State defensive coordinator when the Buckeyes won the inaugural CFP title over Oregon at AT&T Stadium. The Buckeyes won their semifinal game that season over Alabama. … Cincy QB Desmond Ridder holds the AAC and school career record with 12,280 total yards. … Cincinnati is 22-1 since the start of the 2020 season. The only loss was 24-21 in the Peach Bowl last New Year’s Day when Georgia kicked a field goal with three seconds left.