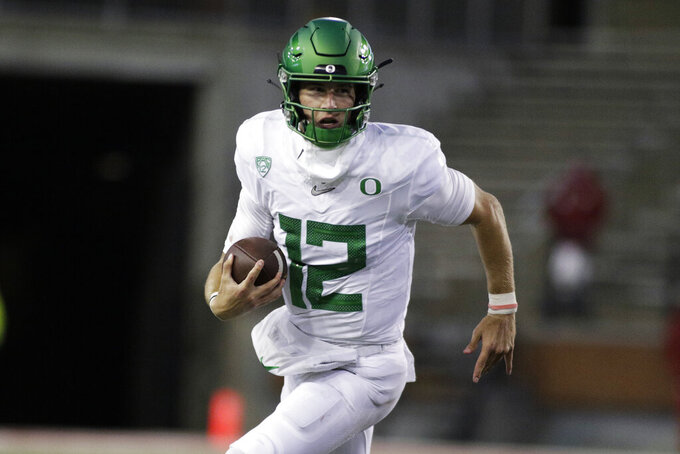 If No. 11 Oregon wants a shot at the College Football Playoff, it needs to win all its games and win them decisively. After defeating Washington State 43-29 last week in Pullman, the Ducks (2-0) return home to Autzen Stadium where they have won 11 straight. It will be a homecoming of sorts for UCLA coach Chip Kelly, who was head coach at Oregon from 2009-12. The Bruins are coming off a hastily thrown together 34-10 victory over Cal on Sunday morning at the Rose Bowl as both teams sought to get a game in amid coronavirus cancelations.

UCLA: RB Demetric Felton. The receiver-turned-hybrid running back rushed for 107 yards on 25 carries against Cal. “This is everything I’ve been wanting to do ever since I stepped foot at UCLA, so it just feels really good to finally be able to do that and help my teammates out and get the win," he said afterward.

Oregon is ranked fifth nationally with an average of 269 rushing yards per game, and first with an averaged of 7.08 yards a carry. ... Oregon is the only team in the Power Five averaging at least 250 yards rushing and 250 yards receiving per game. ... The Ducks have won six straight over UCLA in Eugene. ... The last UCLA win in the series came in 2017, a 31-14 victory in Pasadena. ... The Bruins haven't defeated a top-15 opponent on the road since a 2014 victory at No. 15 Arizona State. ... Bruins tight end Greg Dulcich leads the Pac-12 with an average of 103 yards receiving per game, and 29.4 yards per catch.