No. 13 BYU looks to cap Pac-12 success at struggling USC 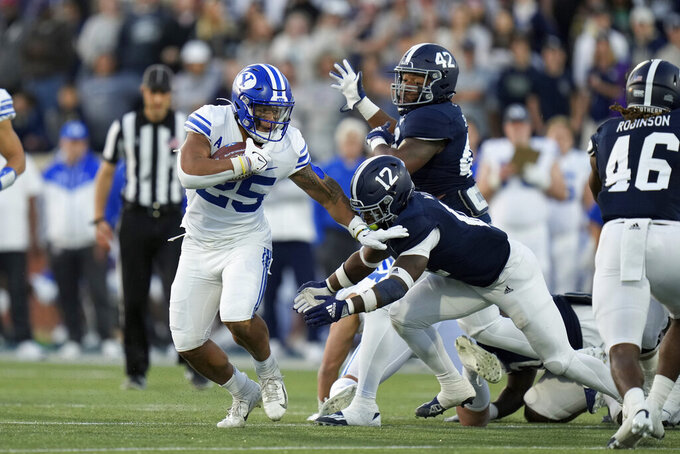 Line: BYU by 6 1/2, according to FanDuel Sportsbook.

The Cougars will try to pile on the misery for the Trojans and Pac-12 as a whole if they can pick up a fifth win against the conference this season. Kalani Sitake can become the third BYU coach to win 10 games in consecutive years, joining LaVell Edwards, who did it three times (1979-81, 1983-85, 1989-90), and Bronco Mendenhall (2006-09). USC must win its last two games to become bowl eligible, but that seems unlikely having allowed 38.7 points per game at home.

USC QB Jaxson Dart vs. BYU S Malik Moore and Jakob Robinson. The freshman from Kaysville, Utah had been one of the few bright spots for the Trojans, but his first career start against the Bruins dampened some of that enthusiasm. Dart was 27-of-47 passing for 325 yards with one touchdown and two interceptions. Moore and Robinson each have three interceptions this season, and Dart will have to exercise patience as a passer if the Cougars drop eight defenders into coverage as they did in stifling the Air Raid offense to upset USC in overtime in 2019.

BYU: RB Tyler Allgeier. The redshirt sophomore has been a key component in the Cougars’ success against the Pac-12 this season, rushing for 456 yards and four touchdowns in wins over Arizona, Utah, Arizona State and Washington State. With the Trojans allowing 5.2 yards per carry in six home games, Allgeier has a good chance to get the 102 yards on the ground he needs to become the second 1,400-yard rusher in school history.

USC: WR Gary Bryant Jr. He had nine receptions for 161 yards and a touchdown against UCLA, providing some juice to a passing game that had struggled since Biletnikoff Award contender Drake London sustained a season-ending ankle injury on Oct. 30. Bryant has the talent to be the next standout receiver for the Trojans.

USC is playing on Thanksgiving week against an opponent other than Notre Dame or UCLA for the 13th time. The Trojans are 10-2 in such games, with losses to Washington in 1934 and 1941. … USC S Xavion Alford has three interceptions in the past two games. … BYU has a plus-10 turnover margin, which is tied for 10th in the FBS. … USC DE Tuli Tuipulotu has 3 1/2 tackles for loss with 3 sacks in his past three games. … Allgeier’s 18 rushing touchdowns is tied with Louisville QB Malik Cunningham for second in the FBS. Marshall RB Rasheen Ali leads the nation with 20.