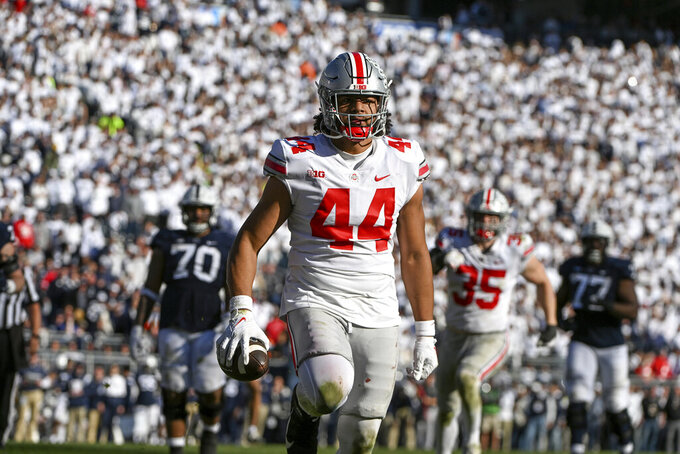 COLUMBUS, Ohio (AP) — Ohio State's win over No. 16 Penn State added to the body of evidence that this could be the most complete Buckeyes team in years.

It also showed the No. 2 Buckeyes can find ways to win on the road, even when their usually prolific offense is slow to get going.

Sputtering early against the best team it has faced this season — the Buckeyes' No. 2 scoring offense in the country trailing 21-16 with about nine minutes left — they turned to former five-star recruit J.T. Tuimoloau and turned in a 28-point fourth-quarter comeback.

Before that, they'd managed just 37 yards on the ground and relied on three field goals from Noah Ruggles.

“A lot of things in the first half we wish we had done better — there's no question,” Ohio State coach Ryan Day said. “But that's playing football. That's competing. ... It doesn't come easy.”

The defense kept up the pressure when the Buckeyes' offense finally got unstuck, starting with TreVeyon Henderson breaking away for a 41-yard touchdown with 8:51 left in the game for a 23-1 Ohio State lead.

That's when Tuimoloau — who had already tipped a pass that turned into a Zach Harrison pick, and intercepted a pass that led to an Ohio State touchdown — strip-sacked Penn State quarterback Sean Clifford and made the recovery on the Nittany Lions' 24-yard line.

One the next play, C.J. Stroud found tight end Cade Stover wide open over the middle for a 24-yard touchdown and a 30-21 lead.

Penn State had time to come back but was stopped three yards of a first down on a third-and-9 on the Buckeyes' 33 to force Jake Pinegar field goal. The Buckeyes got the ball back with 5:49 left, still clinging to a six-point lead.

Stroud's completions of 16 yards and 12 yards to Marvin Harrison Jr. and a 42-yarder to Emeka Egbuka set up a 7-yard Henderson run around the left end to extend the lead to 37-24 with 2:47 left.

Then it was Tuimoloau time again. On the first play of the Penn State drive, the 6-foot-4, 270-pound second-year lineman stuck his arms in the air and picked off Clifford's pass at the 15, trotting in for an easy TD to make it a three-score game.

“Buckeye football,” Stroud said. “I mean, we know it gets tough in the fourth quarter. I think we’re a fourth quarter type of team. At least we try to be.”

Clifford threw a touchdown pass to Kaytron Allen with 1:12 left, but it was too little too late.

“He went crazy this game,” Harrison said of Tuimoloau. “It only takes of us to go crazy, and we can dominate the game and the game is wrecked. Any of us have the capability to do that.”

Ohio State will be heavily favored in games against Northwestern, Indiana and Maryland before their meeting with No. 4 Michigan in Columbus on Nov. 26.