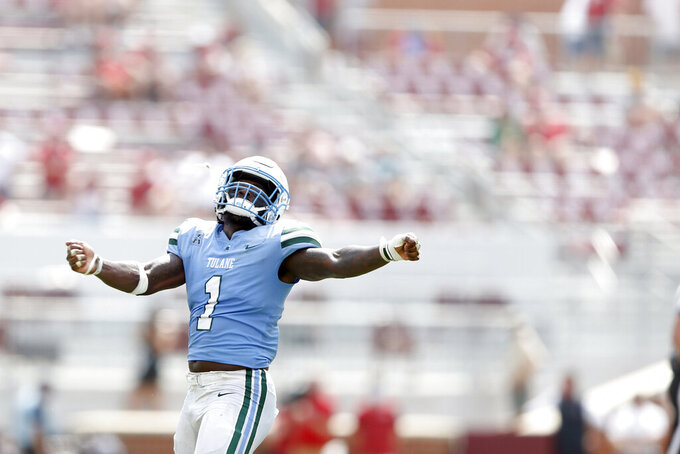 Tulane linebacker Nick Anderson (1) celebrates after his team recovered an onside kick late in the fourth quarter of an NCAA college football game against Oklahoma in Norman, Okla. on Saturday, Sept. 4, 2021. (Ian Maule/Tulsa World via AP)

The Sooners' game against Tulane was relocated from New Orleans because of Hurricane Ida, and Oklahoma's athletic department and fans went all out to make their guests feel at home. Oklahoma had the Green Wave painted on the 25-yard lines, and Sooners fans cheered when Tulane’s players ran into the field before the game.

The Sooners then nearly let the Green Wave claim their first win over a Top 10 opponent since 1973. Spencer Rattler passed for 304 yards and a touchdown and No. 2 Oklahoma, playing a road game on its home field, narrowly avoided a shocking upset by holding on for a 40-35 victory over Tulane on Saturday.

“That was one of the hardest hitting teams, one of the most physical teams I’ve played,” Rattler said. “They came out there, and they played great, better than us, for sure. They wanted to win more than us. You could tell it. We have to be cleaner, sharper, and have to be better.”

The Sooners, who led 40-22 early in the fourth quarter, gave up a pair of late touchdowns. Tulane had fourth-and-13 just short of midfield with just under two minutes to go when quarterback Michael Pratt ran for only 12 yards and the Green Wave turned the ball over on downs. The Sooners ran out the clock.

“The second half, I think clearly our team felt like the game was over,” Oklahoma coach Lincoln Riley said. “That’s obviously my job to make sure our mentality is right. I don’t think it was. I think we were playing well at that point and had separated a little bit. And then you could just see we weren’t quite the same team coming out.”

Oklahoma's Gabe Brkic tied an FBS record with three field goals of 50 or more yards, and Marvin Mims had five catches for 117 yards.

Rattler, a preseason first-team AP All-American, completed 30 of 39 passes, ran for a score and threw for another, but he also threw two interceptions.

Pratt passed for 296 yards and three touchdowns for the Green Wave. He also ran for a score.

“Really proud of the effort," Tulane coach Willie Fritz said. "Obviously, we didn’t come down here to play close. But we could have won the game. If we would had played better in the first half, I think we would have had a much better opportunity to do it. But we’re going to be able to watch the tape and build on it.”

Tulane opened the scoring on a 6-yard touchdown pass from Pratt to Cameron Carroll. The Green Wave went up 14-7 in the first quarter on a 15-yard touchdown run by Jaetavian Toles.

Oklahoma scored the next 30 points. Brkic made three field goals in the second quarter. His second was a 51-yarder, and he closed the half with a career-long 56-yarder. It was the longest field goal for an Oklahoma kicker since 1977.

Pratt scored on a 4-yard keeper, and the Green Wave got the 2-point conversion to make it 37-22.

Tulane cut it to 40-28 on Pratt's 5-yard touchdown pass to Carroll. Pratt stumbled and fell in the backfield on the 2-point try.

Brkic missed a 31-yard field goal, giving Tulane a shot late. Pratt's 5-yard touchdown pass to Will Wallace made it 40-35 with 2:18 remaining, and Tulane recovered the onside kick before failing to score.

Fritz said he loved how focused his players were, especially with so many having family and friends having issues back home.

“Our guys have handled it extremely well," Fritz said. "They really have. I’ve got good young men. I have very few problems with our guys. And, you know, that’s what I’m most proud of. They can handle this kind of situation.”

Tulane: The Green Wave played inspired football and nearly pulled off one of the biggest upsets in school history.

Oklahoma: The Sooners gained just 27 yards on 19 carries in the second half, so they couldn't put the game away. Oklahoma went 2-for-7 on third down in the second half and was outgained 230 yards to 118. It was similar to some of the Sooners' past collapses. Fritz even cited Oklahoma's loss to Kansas State last season, when the Sooners squandered a 21-point lead, when trying to keep his team motivated.

Brkic made field goals of 56, 55 and 51 yards. He became the first Oklahoma kicker to make more than one field goal of 50 or more yards in a game. He fell just short of the school record for longest field goal — Tony DiRienzo hit a 60-yarder in 1973.

“He saved us today,” Oklahoma linebacker Nik Bonitto said. “I’m keeping it 100 with you. He made some timely field goals. He made some really long ones. I’m real happy for him. This is stuff that we see in practice all the time. It was nothing new to him and no surprise when he made those.”

Brooks returned for the Sooners after sitting out last season with COVID-19 concerns. He had 87 yards on 14 carries.

The Sooners could drop after going to the wire against an unranked team.