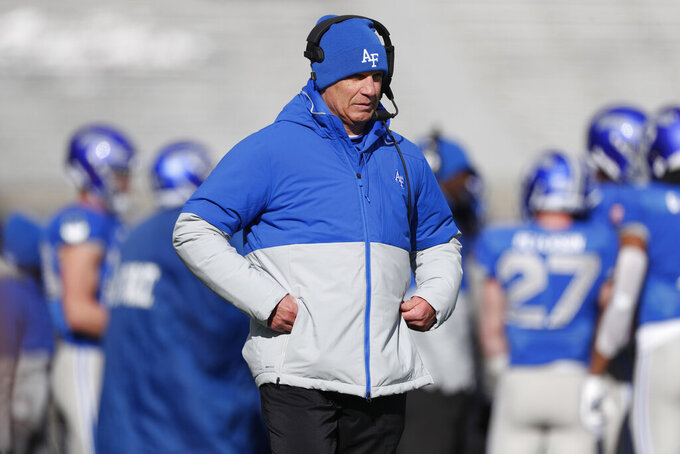 PHOENIX (AP) — Washington State plays an offense known as the Air Raid, designed to spread teams out, get players into space, rack up huge amounts of passing yards.

Air Force tends to work in tighter spaces, relying on a triple option that's difficult to defend and annually is among the nation's best at churning out yards on the ground.

Of the multitude of games during the 2019-20 bowl season, there might not be one with more contrasting styles than Friday night's Cheez-It Bowl at Chase Field.

"Both offenses are quite explosive,” Washington State coach Mike Leach said. “Then, of course, they do such a good job rushing the football. Both defenses are going to try to get the offenses off the field, so I do think how each defense responds is kind of the key.”

After a pair of 5-7 seasons, Air Force (10-2) bounced back to enter a bowl game ranked for the first time since 1998 and has a chance to win 11 games for the third time in program history.

The Falcons, as usual, did it with their ground game.

With quarterback Donald Hammond III making the reads, Air Force was third nationally and led the Mountain West Conference with 292.5 yards rushing per game. The Falcons had four players rush for at least 490 yards, led by Kadin Remsberg's 872, and ran for 37 combined TDs.

“The biggest thing with their offense is it's a very assignment football based,” Leach said. “Everybody's eyes have to be in the right place and consistently where you're supposed to be because if you leave any holes in the net, they'll get a bunch of yards.”

Washington State (6-6) started the season with plenty of promise, opening at No. 23 in The Associated Press preseason poll. The Cougars climbed to No. 19 after winning their first three games but plummeted out of the rankings with five losses in six games.

Washington State's offense wasn't the problem. The Cougars continued to churn out prodigious passing numbers under Leach, leading the nation with 444.4 yards per game.

“The production, the quality of their execution and really the difficulty in trying to assimilate what they do," Air Force coach Troy Calhoun said. "It is going to be a gigantic challenge.”

The culprit, as has been the case under Leach, was the defense. Washington State finished 113th in the FBS in total defense, allowing 456.8 yards per game, and tied for 93rd in scoring defense, giving up 31.4 points.

A few more things to look for when No. 24 Air Forces faces Washington State in the Cheez-It Bowl on Friday night:

Anthony Gordon sat back last season and waited behind Gardner Minshew for his turn as Washington State's starting quarterback. Once Gordon got his shot, he certainly made the most of it.

A senior, Gordon turned his lone season as the Cougars' starter into one of the most prolific in Pac-12 history. He set conference records with 5,228 yards — the sixth most in NCAA history — and 45 touchdowns, and set another record with nine TD passes against UCLA.

The key for Gordon is limiting the interceptions; he had 16 this season.

Air Force typically is one of the nation's best running teams, thanks to an offense that's difficult to prepare for and defend. A bit of balance helped the Falcons keep opponents on their toes this season.

Hammond led Air Force with 11 rushing TDs and was fourth with 491 yards. He also kept opposing defenses honest by throwing for 1,286 yards and 13 scores, the fifth most in program history. Led by Hammond, the Falcons finished first nationally in passing efficiency at 203.7 and yards per catch at 24.56.

Washington State can't just give up on the run — at least not all the time.

A key player in Washington State's ability to stop Air Force's triple option will be linebacker Jahad Woods. The junior is 10th nationally with 121 tackles, most by a Washington State player since 1996, and leads the Cougars with 10 tackles for loss.