No. 25 Oregon State looking for rare win at Arizona State 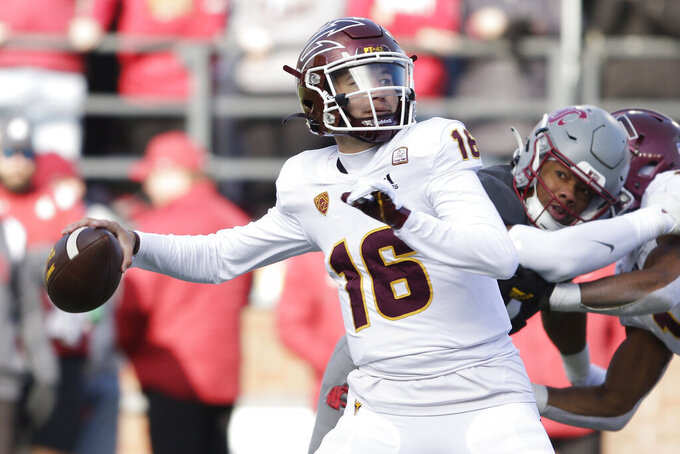 TEMPE, Ariz. (AP) — No. 25 Oregon State is back in the rankings and bowl eligible in consecutive seasons for the first time in nine years.

The Beavers face a daunting task Saturday against Arizona State, trying to win in Tempe for just the second time in 50 years.

The Sun Devils have gone 19-1 at home against Oregon State since 1972 and, despite playing under an interim coach, have Oregon State coach Jonathan Smith's attention.

Oregon State (7-3, 4-3 Pac-12) also is trying to do something that's proven to be nearly as difficult as winning in the desert: win as a ranked team.

The Beavers broke a nine-year drought in the AP Top 25 two weeks ago and promptly lost to Washington. Oregon State bounced back with a win over California to move back into the poll and is hoping to win while ranked for the first time since 2012.

The Beavers arrive in the desert on a defensive roll.

Oregon State dominated Cal in a 38-10 win last week, holding the Bears to 132 total yards, including nine rushing — fewest allowed since 2007. The Beavers are allowing 21.6 points per game, on pace to be their lowest-scoring defensive season since 2000.

“They do a great job not getting hit with big plays,” said Sun Devils interim coach Shaun Aguano. "They do bring exotic pressures, very similar to Washington State, but they play disciplined football.”

Arizona State's Trenton Bourguet has been solid since replacing Emory Jones at quarterback, throwing for 992 yards and eight touchdowns with four interceptions.

Bourguet left last week's loss to Washington State in the second quarter with a lower-leg injury, but said this week he's feeling better and expects to play.

Oregon State has played the last five games without quarterback Chance Nolan due to a neck injury. His status for the rest of the regular season is uncertain, but Ben Gulbranson has played well while Nolan has been out.

Gulbranson has thrown for 817 yards and seven TDs with an interception in his five starts, adding a rushing TD last week against Cal.

“With every snap you take you grow from those opportunities and I’m just grateful to be in this opportunity and playing these games and I look forward to finishing strong here,” he said.

Oregon State saw nine players go down with injuries last week and may be in a similar situation this week.

Safety Jaydon Grant, cornerback Alex Austin and running back Jack Colletto were among the players injured and the availability of all the injured is still up in the air.

“We’re not the only program dealing with that,” Smith said. “Shoot, we’re playing Arizona State, and they’ve had a bunch. I look across the league. It’s an unfortunate part of the game. No one is playing with their full roster at the end of the year.”

Aguano was promoted from running backs coach when Herm Edwards was fired on Sept. 20. The Sun Devils (3-7, 2-5) haven't exactly turned it around, but they did knock off a ranked Washington team while Aguano has gotten growing support from the fan base and those within the program to be named the full-time coach.

“You got a local guy that knows the people in the Valley and knows all high school coaches in the Valley and that wants the job,” Arizona State defensive coordinator Donnie Henderson said. “Maybe I’m speaking for him, but you got the perfect candidate.”