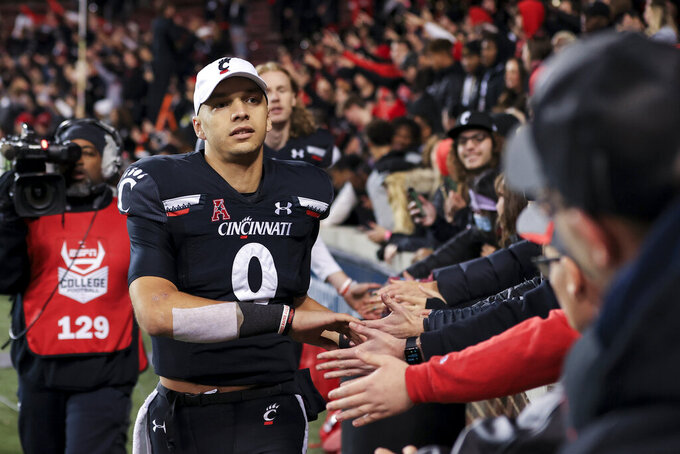 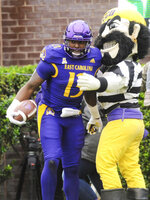 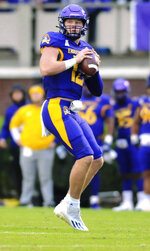 No. 4 Cincinnati is riding a successful formula to the College Football Playoffs: Beat everyone on its schedule and wait out the other contenders in front of the Bearcats in the rankings.

The Bearcats (11-0, 7-0 American Athletic Conference; CFP No. 4) are looking for a repeat performance of last weekend's events when they play at East Carolina on Friday.

Cincinnati, ranked outside the CFP's final four, topped SMU 48-14 and watched Oregon fall at Utah. The Ducks were ranked third in the CFP and their loss cleared the way for Cincinnati move into the playoff field at No. 4 in the committee's latest Top 25.

“We keep trying to stress to our guys we've got a long way to go,” Bearcats coach Luke Fickell said after the latest rankings. “We've got two really big games ahead of us. But I think all and all, the excitement about it and the recognition is well deserved to a group of guys that have really fought and battled all year.”

Cincinnati looks to finish off its second-ever 12-0 regular season against the Pirates (7-4, 5-2). Beside staying undefeated, the Bearcats would move a step closer to becoming the first-ever team outside the Power Five to play for a national title.

And things look like they're trending Cincinnati's way. Teams ahead of them in the CFP rankings — No. 2 Ohio State and No. 3 Alabama — have tough games ahead.

Fickell wants his Bearcats to focus only on what they can control: finish strong at East Carolina. the Pirates are riding a four-game win streak and are pumped to host a team ranked in the top 5 for the first time since 2006.

Pirates coach Mike Houston understands his club will have to slow down the AAC's highest-scoring offense and a Heisman Trophy contender in quarterback Desmond Ridder.

“It’s going to be a challenge, but our kids are excited about it,” Houston said.

Ridder has passed for 829 yards and 10 touchdowns against no interceptions the past four games. He's thrown for nearly that much in three wins the Pirates with 823 yards and eight TDs.

Ridder believes his team will drown out the playoff noise to concentrate on East Carolina. “Keeping everyone focused, locked in on the game and locked in on what we need to do,” he said. “I think that's what can make us be successful there.”

Cincinnati tailback Jerome Ford is within several school milestones this season. His 16 rushing TDs this season are within three of Mike Warren's school record, set in 2018. Ford has 17 total touchdowns this year, three behind Warren's mark. And Ford has rushed for 971 yards and will likely break that mark this weekend.

East Carolina has won its past four games to clinch a bowl berth and its first winning season since 2014 when it went 8-5 and lost the Birmingham Bowl to Florida, 28-20. The Pirates will look to match the five-game winning streak it had that year when it faces Cincinnati.

Cincinnati QB Desmond Ridder is the fourth FBS quarterback with 40 career wins, gaining his 42nd with the 48-14 victory over SMU. The fourth-year passer can move up third all-time — and break a tie with TCU's Andy Dalton and Georgia's David Greene — by defeating East Carolina. Ridder could chase down Texas' Colt McCoy's second place mark of 45 wins. Boise State's Kellen Moore leads with 50 wins.

Mike Houston had already decided to put walk-on kicker Owen Daffer on scholarship, so he was glad to see Daffer hit a career-long 54-yard field goal in the final seconds of the Pirates' 38-35 victory at Navy last week. “I hadn’t told anybody that, him or his parents or anybody, there’s no better moment to tell him,” Houston said. “It makes it that much more of (a) special moment for him.”

Cincinnati coach Luke Fickell is not jazzed about playing at East Carolina, someplace that's been difficult for his Bearcats in recent years. Cincinnati was pounded 48-20 there in 2017, then needed a late field goal to escape with a 46-43 victory in 2019. “That's kind of what you have to prepare yourself for, and not just going on the road, but also watching as this team in the last five weeks and how they've played,” Fickell said.