No. 4 Oklahoma to focus on process vs. Western Carolina 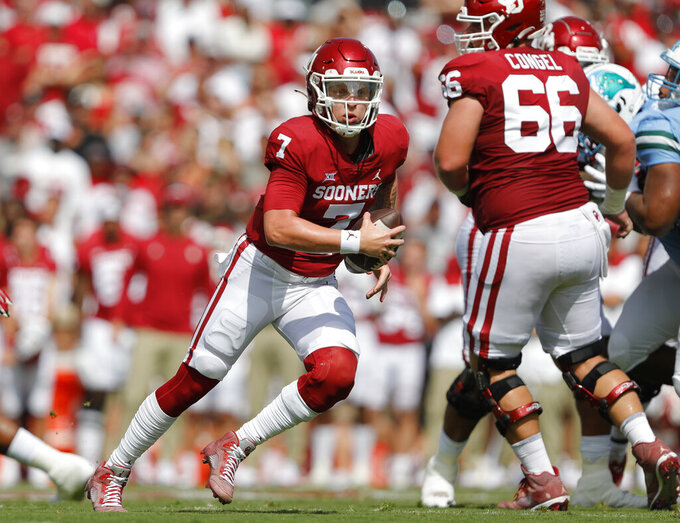 NORMAN, Okla. (AP) — Oklahoma players became increasingly worried about the score last weekend as Tulane rallied in the second half.

Oklahoma held on to beat Tulane 40-35, but the close call led to a two-spot drop in the AP Top 25. Riley wants his fourth-ranked squad focused on performance and execution when it hosts Western Carolina on Saturday.

“We were too circumstantial the other day,” Riley said. “We were worried about the scoreboard, all the other circumstances, as opposed to our brand of ball, our standard of ball -- regardless of any of those outside factors.”

Western Carolina (0-1) is a Championship Subdivision program that hasn't beaten an Football Bowl Subdivision team in 59 tries. Riley said just like the scoreboard, the level a team comes from shouldn’t be a concern.

“If we’ve got any chance of being a good football team, we’ve got to figure out how to play four quarters and our mentality not being affected by the scoreboard, our opponent, anything else,” he said. “That is the sole focus of our program right now.”

Perhaps the most focused Sooner on Saturday was kicker Gabe Brkic. He tied an FBS record with three field goals of 50 or more yards against Tulane. He connected from 56, 55 and 51 yards.

“I’ve learned throughout the years that you can’t think about that kick in the moment,” he said. “It’s all about muscle memory at the end of the day. I’m not going to tell you what I think about, but I take my mind completely off of football.”

Oklahoma quarterback Spencer Rattler passed for 304 yards and a touchdown against Tulane, but many Sooners fans were frustrated with him for throwing two interceptions and blamed him for the team’s inability to keep the chains moving, especially in the second half.

Riley said Rattler was good, and only one of the interceptions was his fault. He said Oklahoma’s pass protection against Tulane was “excellent,” and Rattler could be more effective if he stays in the pocket rather than trying to move around when it’s not necessary.

“I think there were some times in the game -- second play of the game and a couple others specifically in the second half -- I think there was some frustration and he tried to make too much happen,” Riley said.

Western Carolina is coming off a 31-28 loss to Eastern Kentucky. The Catamounts missed a 56-yard field goal that would have tied the game as time expired.

“They are a really good football team,” Bell said. “A lot of talented football players. We’re going to go up there and give it our best shot. That’s the only way we can go about things.”

Though Marvin Mims led Oklahoma with 117 yards receiving on five catches against Tulane, the top pass catcher on Saturday was Mario Williams with six catches and 37 yards.

More may be in store for Williams, a freshman from Tampa, Florida.

“He’s got a confidence about himself,” Riley said. “You can tell he knows that he belongs out there and for a young guy, that’s very cool.”

It will be difficult to duplicate those numbers against Oklahoma.

“They are so good up front,” Bell said. “You’re playing against NFL players across the board in their defensive front. That’s going to be a big challenge for our offensive line.”

Western Carolina offensive line coach Jon Cooper was a star center for Oklahoma who was Big 12 Offensive Lineman of the Year in 2008. Cooper stepped in for John Peacock, who died in August of complications from COVID-19. Bell said Cooper has done well under the circumstances.

“I think he’s a perfect fit for what we needed,” Bell said. “A guy who has a lot of knowledge. A guy who has really helped us in the run game and get some things cleaned up that we were looking to do with coach Peacock. But he’s just sort of added to that and come in and done a good job.”

Oklahoma running back Eric Gray, a transfer from Tennessee, started the opener had nine carries for 27 yards. Riley expects Gray to become more productive as he gets more comfortable with his new linemen.

“He was solid,” Riley said. “I thought a couple of his best runs honestly were ones where that wasn’t much there, and he made a few things happen. He had a couple of really good tough, active runs for us that really stood out.”