No. 9 Oregon is undefeated heading to Oregon State 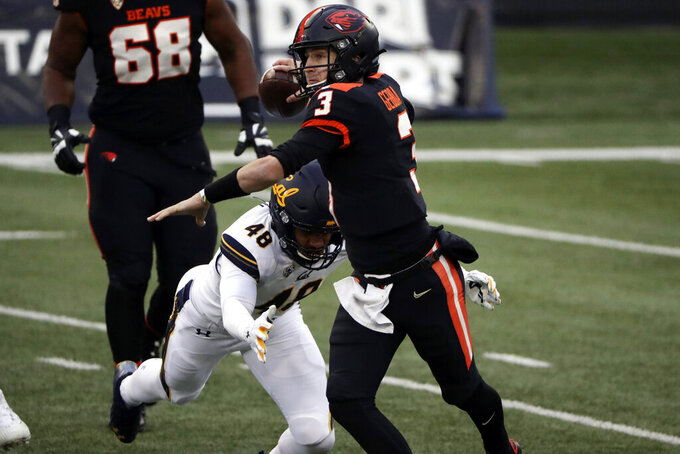 Oregon State quarterback Tristan Gebbia (3) throws a pass before being brought down by California outside linebacker Orin Patu (48) during the second half of an NCAA college football game in Corvallis, Ore., Saturday, Nov. 21, 2020. Oregon State won 31-27. (AP Photo/Amanda Loman)

Ninth-ranked Oregon hopes to remain perfect, not to mention get all its games in, during the short season to have a chance at the College Football Playoffs. The Ducks are ranked No. 15 in the CFP rankings released Tuesday. Oregon struggled a bit against visiting UCLA and former coach Chip Kelly last weekend but still emerged with a 38-35 win. The Beavers are coming off a morale-boosting 31-27 victory over California at home last weekend after a pair of losses to open the season. Jesiah Irish was a breakout star for the Beavers, blocking a fourth-quarter punt that set up the winning touchdown drive.

Oregon's high-powered offense against Oregon State's energized defense. The Ducks top the Pac-12 with an average of 38.7 points and 499.7 yards a game. Tyler Shough has thrown for a league-leading eight touchdowns in three games. Oregon State linebacker Avery Roberts leads the league with 32 tackles, including 23 solo tackles, this season. Oregon State has three interceptions this season.

Oregon: Shough has thrown for three touchdowns and 300-plus yards in the past two games, one of just four QBs nationwide with as many TDs and passing yards in consecutive games. He's also rushed for 197 yards and a score. He's the first Oregon quarterback with multiple 300-yard games in his first three starts.

Oregon State: RB Jermar Jefferson earned Pac-12 player of the week honors after running for 196 yards and a touchdown against Cal. On the game's first play from scrimmage, he ran for 75 yards and a score, his longest career carry. Jefferson is averaging 149.7 yards a game so far this season, and has run for 100 or more yards in each of the Beavers' first three games.

The Ducks have a seven-game winning streak, dating to last season. ... Oregon has won 11 of the last 12 games against Oregon State. ... The rivalry was formerly called the Civil War, but both teams mutually decided to drop the moniker for games across all sports. ... The Ducks have won five of their last six conference games on the road. ... Oregon State quarterback Tristan Gebbia rushed, passed and caught a touchdown in the game against Cal, becoming just the 11th Pac-12 player to do so in a single game since 1996. ... Oregon won last year's game 24-10. Gebbia made his first career start for the Beavers in that game.