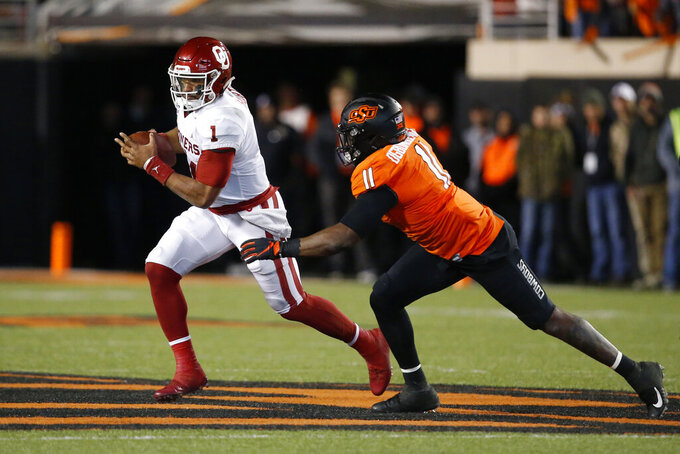 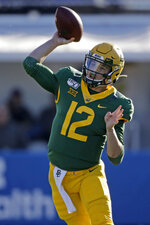 He’s also never had one quite like Jalen Hurts. The graduate transfer has rushed for 1,217 yards and 18 touchdowns this season and is nearing the school record for rushing yards in a season by a quarterback.

“I love having mobile guys, and I think being able to run the quarterback some here and there is a great thing to be able to do offensively,” Riley said. “But to say we’d have a guy that would rush for that many yards — I probably would have lost that bet.”

Baylor quarterback Charlie Brewer brings a similar dimension to the Bears’ offense. Though both are good passers, how effectively Hurts and Brewer use their legs could determine who wins the Big 12 championship game between No. 6 Oklahoma (11-1, No. 6 CFP) and No. 8 Baylor (11-1, No. 7 CFP) on Saturday.

“I mean, I think he's an incredible athlete, can throw the ball, can run it,” Brewer said of Hurts. “I'd like to think that I can throw it and run it, too.”

The quarterback run game played a key role in the teams' regular-season meeting that Oklahoma won 34-31. That night, Hurts ran 27 times for 114 yards and Brewer ran for 65 yards and two scores.

“He protects the football at a high level, he’ll run it, he’s smart, he sees things,” Baylor coach Matt Rhule said. “He sees protections, and he’s able to withstand kind of getting a hit.”

“Every time he got up, we just looked at him like man, hey we give a salute to you,” Baylor linebacker Jordan Williams said. “He's very tough.”

Hurts doesn’t mind a heavy workload. He ran 28 times for 173 yards and two touchdowns against TCU, one of three games in the past month in which he has carried at least 20 times.

Riley has enjoyed tinkering with his offense and finding ways to use Hurts’ running skills.

“We certainly have a base system and concepts that we are very committed to, but we also want to have the ability to branch out and do what our people do well and do things that give other people trouble,” he said. “It’s been fun. It’s been different, but a lot of fun."

“I think he’s a really tough kid on top of being an obviously very talented player, but real tough kid,” Riley said. “I’ve seen him get hit a lot. Gets right back up, so he brings toughness to the position, which I think is a huge key at that position.”

Brewer only had two carries last week against Kansas. Rhule said that likely won’t be the case this week.

“Against Kansas, we were trying to limit how many times we ran Charlie,” he said. “This game, there’s no game next Saturday, so I think everyone’s just going to let it all hang out, and I’m sure they will, too.”